Cliodhna Ní Shé selected on SportsDaz Team of the Year

CARLOW and Bennekerry/Tinryland footballer, Cliodhna Ní Shé, has been selected on the SportsDaz Football Team of the Year. The website is dedicated to promoting camogie and ladies football through weekly podcasts.

Using social media, the organisers adapted a clever approach to the selection inviting people to cast their votes for their preferred players. The four top names for the various positions then went forward to another selection process with the bottom names in lists of four being omitted. 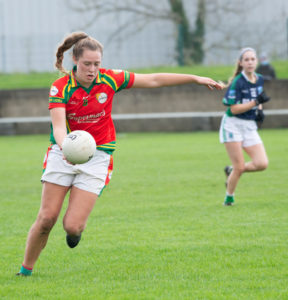 Cliodhna Ní Shé was recognised for her performances for Carlow
Photo: Adrian O’Neill

Over five days of polls, 53 contests and 34, 975 votes brought 121 starters down to 15 counties with ten counties represented in the final selection. Cliodhna was a front-runner as soon as polling was announced.

“I knew immediately when the first poll was published I received amazing support. I couldn’t have done it without the support of all the Bennekerry/Tinryland and Carlow teams. They were putting it up everywhere,” she said.

There was never any question of being on tenterhooks. It was more a case of watching the week unfold.

“It was exciting. I was enjoying it. People were texting me and it was really nice. With very little sport going on at the moment it was really nice to see the way the voting went. It was recognition for Carlow as well,” she pointed out.

“Everyone was pushing it with friends and family.”

On Friday evening the team was finalised. Cliodhna was in Dublin with her housemates at the time. At this stage she doesn’t even know if the winning team get an award or any further media exposure.

“I honestly don’t know. I think it is just the recognition and honour,” she said.

“Trying to get a bit of running and strength and conditioning in. Trying to be in the best shape when we get back.”

SportsDaz Team of the Year: