ONE of Ireland’s true horse racing greats passed away today. Tom Foley, 74, will be forever remembered as the charismatic trainer of ‘The People’s Champion’ – Danoli, the horse that captured the hearts of racing fans all over the country through the 1990s. To mark the passing of the much loved Aughabeg based trainer, relive this interview with Kieran Murphy looking over his time with Danoli, which appeared in print in late 2019.

He was The People’s Champion. His owner, Dan O’Neill knew it, the trainer, Tom Foley, knew it. More importantly Danoli knew it and the love the public showed for the County Carlow gelding the horse gave it back one-thousand fold on the track. 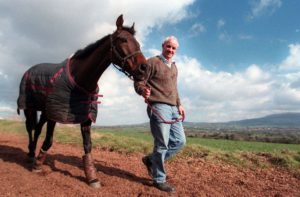 “If you could get fifteen footballers willing to put in what he was doing you would have no worries about winning an All-Ireland,” said Foley as he recalled halcyon days when the names Tom Foley and Danoli were on everyone’s lips across the Irish sporting world.

Myshall’s Danny O’Neill and Tom Foley were good friends. When O’Neill decided to get a racehorse they were initially planning to buy a filly at the 1991 Goffs Sales. Instead Foley was attracted to a young gelding. It wasn’t the small white star and a white sock on his rear left foot that caught his attention.

“We spent all day and there wasn’t a filly in it that I could bring home. I kept coming back to this lad. He just looked so relaxed. He was lying out in the house and I said to Danny we would have a go at this one. Danny said no bother.”

It didn’t take long for Foley to realise they had a good one.

Unbeaten in his first two bumper races of the 1992-93 season the temptation was to send Danoli to Cheltenham for the Champion Bumper. Foley wasn’t so sure.

“To go with a young horse takes an awful lot out of him. Very few horses get over it. There was a bumper coming up over in Punchestown which was worth 15,000 Irish pounds. The bumper in Cheltenham was worth 20,000.”

The owner left it up to the trainer.

“What would you do,” asked Danny.

“I tell you what I’d do. I’d go to Punchestown. When the race is over we will have the horse back in the house in an hour or so. He is out in the field the next day and is ready to go on his holidays,” replied Foley.

Danoli duly won in Punchestown in February but Foley was criticised by some punters.

“We were coming out and coming up the gangway with the horse there were people telling us we were not fit to have a horse as you wouldn’t go to Cheltenham,” Foley related.

In the 1993-94 season he won in his first two starts before coming third at Leopardstown at Christmas.

Around that time champion jockey, Charlie Swan, who had rode him to victory in his maiden hurdle at Fairyhouse opted to ride another horse. In his absence Tommy Treacy had won on Danoli.

Foley said it was a tough decision to let Swan back up when the jockey contacted them.

“I had to sit back and think. He was the top jockey and knew Cheltenham so we had to put him back on. I said to Danny that Cheltenham was one place where he (Danoli) will learn an awful lot. When you are going to Cheltenham you are taking on very experienced horses.”

Under Swan, Danoli came second in the Irish Champion Hurdle and went on to win again before going to Cheltenham. Foley was still concerned about how the horse would take to travelling long distances.

“It was the first horse he had ever been out of the country with and he was anxious.

“Would you mind if we flew the horse over?” he asked the owner.

“It would only be an hour. If we put him on the boat he will have to travel over two hours to the boat, he will spend two-three hours on the boat and spend another four hours travelling from the boat to Cheltenham. I don’t know how he will take it,” he told O’Neill.

“We looked up the cost. There was a good lot of horses flying out that time. There is a plane rigged up for twelve to fourteen horses. Danny gave him the thumbs up.”

In Cheltenham, Foley didn’t feel any pressure until the evening before the race when watching the TV he heard it said Ireland had not had a winner so far.

“Someone said we have Danoli tomorrow. Then it hit us. We knew it was more than a race. This was between Ireland and England so we knew we had to win,” recalled Foley.

Danoli was brilliant the following day and obliged beating Corrouge by two lengths. He received a rapturous welcome when he came back into the ring.

“The people really took to him. I think he hated disappointing people. He gave everything. He loved the crowd himself. All he wanted was to get out in front of the crowd,” agreed Foley.

There was only one place for Danoli after that and it was 1994 Grand National meeting where he enhanced his reputation when beating Mole Board in the Aintree Hurdle.

That ended Danoli’s season but he proved he had not lost any form when he returned to action for the 1994-95 season in November winning the Morgiana Hurdle at Punchestown.

Around that time Doran’s Pride trained by Michael Hourigan and owned by Tom Doran had also captured the imagination of the Irish racing public. Foley says there might have been a sense of rivalry out there among the racing public but it was something he never encouraged.

“We were put under a lot of pressure around that time. We were preparing him for Cheltenham.

“I said to him I don’t gamble. The owner doesn’t gamble and I don’t plan to do something I don’t want. I wasn’t overly happy to have pressure like that.

“We take on what is in the race and we don’t pick out any horse for something like that. I want to beat every horse that is in it. It did bring an extra number in. Michael Hourigan and myself were brought on TV that time.”

“We took him on (Doran’s Pride) that day and won as we liked,” Foley noted but the feeling among the racing public that there was a rivalry never fully went away. Particularly when Doran’s Pride got his revenge at the Christmas Leopardstown meeting.

That didn’t alter Foley’s plans of targeting his star attraction for a tilt at the 1995 Cheltenham Champion Hurdle.

It was a bid to create history but it wasn’t to be. Starting joint favourite, Danoli had to settle for third place behind Alderbrook, which was trained by Kim Bailey and ridden by Norman Williamson.

“Things didn’t go the way we wanted. He went to the front coming to the third last. Charlie gave him a pull back. He thought he was asking him to jump the hurdle.

“If he had hit the front that time he wouldn’t have been beaten.”

Compensation and then despair came in quick succession when Danoli retained the Aintree Hurdle but went lame immediately after the race. There were real fears they were going to lose Danoli.

“The vets were unbelievable. I would have to give full credit to the vets, the guards, the race-track. They gave us a full police escort to the horse hospital. It was the very same as if it was the President. They stopped all traffic as if we had the right of way. We knew he was bad,” said Foley.

Danoli pulled through and the trainer was not disappointed to miss the rest of the season. The gelding didn’t return to action until the 1996 Irish Champion Hurdle where he finished third behind Collier Bay. This time Tommy Treacy was back in the saddle.

A massive crowd turned out to watch Danoli, under Treacy, justify odds of 2/5 fav in the 1996 Red Mills Trial Hurdle in Gowran Park in February. It was back to Cheltenham but he could only finish fourth in the Champion Hurdle. Subsequently, he took third place in the Aintree Hurdle behind Urubande.

In 1996/97 Danoli went chasing. The years were catching up and Foley could see the gelding was in pain.

“He loved racing but when you saw what he was going through there was no way he could stay doing it. He was in own worst enemy. He was killing himself doing it.”

Even in training Danoli gave his all.

“If he was any other horse he wouldn’t have come back. He got up in the daytime in his box and would be tearing to get out. He would get out and do his work but he would be roaring with the pain,” recalled Foley, who to this day, still grimaces when he thinks about what the horse put himself through.

Perhaps Danoli’s finest chasing achievement came in Leopardstown February ‘97 when he beat a star-studded field to win the Hennessy Cognac Gold Cup. Tommy Treacy was still on board.

“That was a very good Hennessy. There were four Gold Cup horses in it. The Grey Monk, Merry Gale, Jodami and Imperial Call,” said Foley.

Danoli only ran occasionally after that. His last win under JR Barry came at Navan in 2000 and after falling at the Punchestown Heineken Gold Cup in a race won by Commanche Court Foley retired his beloved horse.

“We had to stop. We couldn’t keep putting him through it anymore.”.

Danoli spent most of his retirement in the National Stud where he was “looked after unbelievably” as Foley would put it. For the record the People’s Champion was put to sleep in 2006 suffering badly from colic.

With his wife Grettie and four grown-up children, Sharon, Adi (Adrienne), Pat and Grettie, Tom Foley is still training horses. He says there is not a lot of money in it but he loves doing what he does.

“There is a lot of hard work in it. It is something like beer. When you get into horses and get going it is very hard to get away from it. The thrill you get out of a good horse is unbelievable. It is a way of life.”

By Kieran Murphy. This interview originally appeared in the 2019 Fireside Companion.