MOLLY Scott has been selected on the Irish team for the European Indoors Athletics Championships which takes place in the Polish city of Torun on the weekend of 5-7 March. Her selection comes in the 60m sprint event after she made the qualifying time in the Irish Life Health Elite Athlete Indoor Micro Meet which took place over the weekend at the Irish National Indoor Arena in Dublin. 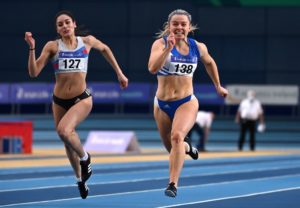 To facilitate the runners in their quest for a qualifying time there was a separate race an hour before the final and it was here where Molly ran in a time of 7.36 winning from Joan Healy of the Leevale club. That was the mark needed to make the plane to Poland.

Having achieved the time, it eased the pressure on the St Laurence O’Toole’s sprinter where, in the second series, she took gold in a time of 7.37. The day was all about getting the qualifying time for Poland. The Carlow runner said she was ready and primed before the race.

“I was quite nervous. I definitely put myself under pressure. Usually you have loads of races to try and qualify for Europeans. I only had today. When I am in those pressure situations, I have been running since I was ten, so I can rely on myself to pull it off. I was definitely relieved when I saw the clock after,” she said.

“I was delighted to get the win. I was thinking of the time and got it on the button. The world relay is coming up in April and May so you have to show form so I also had to do that.”

Scott ran in the last European Indoor Championships in Glasgow in 2019 and will hope to go one better than there where her time of 7.43 wasn’t enough to make the semi-finals.

Meanwhile Marcus Lawler had to settle for second place in the 200m event on Saturday behind Leon Reid from the Menapians club in Wexford. There is no 200m event in Poland but the reverse has given him something to think about.

“I felt I was really running well down on the back straight for the first half of the race. From 150 from home I felt the back wheels fell off. It is an area I will have to address. It shouldn’t happen. I should be finishing strongly. I wasn’t able to finish strongly,” he said.

The following day he finished fourth in the 60m dash with Reid again taking gold.

“I am a bit off the pace in the 60m. I need a lot of races to be competitive. I had it in the back of my mind but 200m is where it is for me,” Marcus confirmed.

IT Carlow student John Fitzsimons, from Kildare, also qualified and will compete in the 800m.