THE Premier League title race is all but over right now with Man City running away with the league and looking like the best team in Europe at this time. They beat Arsenal on Sunday to make it eighteen wins in a row in all competitions and a record eleven Premier League wins in a row too. It is hard to see anybody stopping them in all competitions and the domestic treble is very short odds right now but the big one they want to win is the Champions League. For some reason they have always seemed to struggle in Europe even though their possession and attacking style of football is probably most suited to Europe. Despite that, the furthest they have got in the Champions League under Pep Guardiola is the quarter final three seasons in a row. With the money they have spent and the talent they have in their squad it surely must hurt them that they have not done better than the quarter finals under Pep. 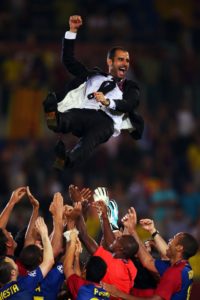 Pep Guardiola won the Champions League as a player and then twice as a manager with Barcelona and his job won’t be complete with Manchester City until he wins the trophy with his current club
Photo: ©INPHO/Getty Images

This year might be their best chance at winning the Champions League since Guardiola took over. There are a lot of the traditional bigger European clubs who seem to be in a transitional period and maybe on the decline from previous years whereas it looks like City are on the rise again. Again, the majority of that success goes back to recruitment and not standing still as a club like some other have. I highlighted last week how Liverpool have just come off the back of a title winning season (their first since 1990) and with all the trouble they have had with injuries at centre half still neglected to go out and buy another top-class centre half to replace Virgil Van Djik while he is injured and then to play with him when he is back fit. City on the other hand signed Ruben Dias who has to be the signing of the season and is possibly in the running for player of the year too because he has changed the whole course of their season. Since Dias has signed City have only lost one Premier League game (which was his second) and only conceded nine goals in those twenty-one games he has played. Aymeric Laporte who had looked like City’s best defender in the last couple of seasons has been resigned to playing second fiddle to Dias and fighting it out with a rejuvenated John Stones for the other available position at the back.

As things stand right now City look like they could dominate for years to come in England. Liverpool looked very similar last year but they have taking a few backward steps this season and most of the chasing pack still have a bit to go to be on the same level as Man City and possibly Liverpool but only if Liverpool get their act together soon. Of the challengers Spurs look like a decent side at times but if you take Harry Kane or Son Hueng-Min out of their side they would do well to finish in the top six as everything good about their play seems to come through both of those players. Man United are getting there slowly but surely but they still keep shooting themselves in the foot and losing games or dropping points to teams below them after a couple of great results against the sides in and around themselves. Chelsea have just changed manager and they look like they could be building something there now with Thomas Tuchel’s style of play but Roman Abramovic is very trigger happy and could make a change at any time. West Ham are having a brilliant season, but they have a long way to go to be near the level of the other on a regular year by year basis but credit where it is due, they have been excellent this year.

Of all the chasing pack I think Leicester are the most exciting team and the one with the most potential. They have already shown that they can win the Premier League and they have an excellent manager in Brendan Rodgers who is playing a very attractive brand of football and has exciting players at his disposal too. Not only that but they can do the dirty side of the game and grind out results too. They seem to have a very good transfer policy around the club too which has played dividends in previous years with Riyad Marhez, N’Golo Kante and Harry Maguire all signing and then being sold for a massive profit with the money then been reinvested into new signings like Youri Tielemans, James Maddison, Wesley Fofana, James Justin and Caglar Sonoycu who are all young players and getting better and better with every game. If they can hold on to those players and the players keep developing at the rate, they are we are looking at a very good side for years to come and possibly a title challenging one too.

The Pádraig Amond Column appears in The Nationalist every Tuesday.