IT was the end of an era at the recent Carlow ladies football annual general meeting when Kathleen and Fran Mullins stepped down from their respective officers positions of the county board and didn’t put their names forward for election. For over twenty years now the Askea pair have given part of their lives to ladies football at county, provincial and national level but Kathleen’s ill health has seen the couple make the decision to step back from any further involvement. 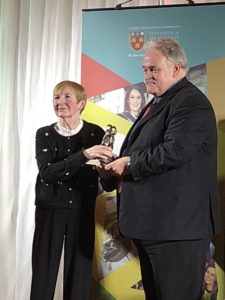 A holder of three senior hurling medals, one with Palatine in 1972 and two with Carlow Town, it was Fran who first became involved with ladies football in 1994 when Anita Phelan and Kitty Farrell asked him would he train Bennekerry-Tinryland underage teams with Pat McArdle.

From there he was elected Chairperson of the Carlow County Board in 1995 when Tom Hanafin steeped down. From 1995 to 2005 he held that position and went on to become a. Carlow delegate to Leinster. He was subsequently elected on to the Leinster Fixtures committee and it is a role he has held for the last seventeen years and still does.

For fourteen years now he has also sat on the national fixtures committee while he still is a Carlow delegate to Leinster while he was also Treasurer of the Carlow County Board for many years.

He trained teams in Bennekerry-Tinryland for ten years and also coached Carlow underage teams while he was also was a prominent LGFA referee in the mid-nineties travelling the country with his umpires, Eamon Dowling, Donal Mullins, the late Mick Byrne and Mick McAssey.

Kathleen and Fran are married for nearly forty years now. As their children, Leah, Donna and Karen became involved with ladies football in Carlow, Kathleen took an interest and the Askea club member attended her first county board meeting in 1997. She was elected PRO in 1998.

Kathleen was Carlow delegate to Leinster for many years while she was Assistant Treasurer for over six years up to recently. She says she would never have dreamt of stepping down but circumstances have dictated matters.

“I loved doing it. I always said when I was getting no enjoyment I would step away. Bad health intervened but I am still as interested as I ever was,” she says.

When Fran and Kathleen first became involved in ladies football the club scene wasn’t going well and neither was the county.

“There was one particular time when we got on to a bus in Tinryland to head to Derry and we had only eight players getting on the bus,” said Kathleen.

“We gained a few more along the way. We only had eleven but we travelled and we played. To maintain the integrity of the league we played fifteen. They did offer that we give the game but we said no and played the game as it was. The girls played outstanding football that day (circa 2009).”

From Ardattin and a keen badminton player before football intervened, Kathleen said she took great joy out of Askea’s men’s junior football championship winning side in 1993.

Fran, himself, won a senior hurling championship title with Palatine in 1972 and subsequently added two more with Carlow Town. He went on to referee ladies football up and down the country. When his three girls took up ladies football that helped him make the decision to become involved himself.

“I had three daughters who were involved with ladies football so I said I would go and do a bit with them. I took it from there and the more training I did the more involved I became. We had great success with the Bennekerry-Tinryland underage teams and the county teams were good enough to win a junior All-Ireland but just didn’t get there,” he recalls.

Kathleen says Niamh Dobbs was one of the best players who ever played for Carlow. In return, the St Fortcherns club player is keenly aware what the Mullins family contributed to ladies football themselves.

“Kathleen has been there so long. She would have gone through so many different people. She has given a life-time to the sport. She and her family have given a lifetime’s service to ladies football in Carlow and beyond. For Kathleen, football has even come before family on many occasions,” says Niamh.

“Kathleen Mullins have given a life-time to ladies football in Carlow. The Mullins family would have held positions when it wasn’t fashionable to hold positions in ladies football in Carlow. Kathleen herself constantly turned up at county board meetings and in all kinds of weather, stood at gates when it was hard to get people to do so,” said Niamh.

“It wasn’t something people wanted to be involved in years ago. The Mullins family fought for pitches, training gear, sponsors when it wasn’t fashionable to be fighting for ladies football. They were on gates, washed jerseys, got programs and team sheets printed and everything they did was to improve the standard and profile of ladies football in Carlow,” says Dobbs, who is currently a Leinster delegate alongside Fran.

Cliodhna Ní Shé selected on SportsDaz Team of the Year