The Football Association of Ireland is delighted to announce the appointment of Anthony Barry as assistant coach of the Republic of Ireland senior men’s team. 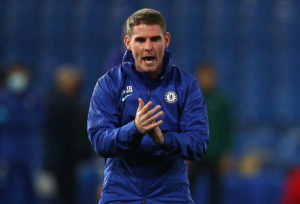 The current Chelsea first-team coach joins Stephen Kenny’s coaching staff ahead of the start of the FIFA 2022 World Cup qualifying campaign in March.

Anthony will remain in his existing role at Chelsea and link up with the Ireland squad in the international windows.

“I’m delighted to join the Republic of Ireland coaching staff ahead of the start of the FIFA 2022 World Cup campaign,” said Anthony Barry.

“The skillset Anthony brings will complement the existing coaching team and I look forward to him joining up in March ahead of the World Cup qualifiers.”

“I am really pleased that we have confirmed Anthony in this key role as Stephen continues his preparation for the start of the World Cup qualification process and what is a hugely exciting year ahead for the senior men’s team,” commented FAI Chief Executive Officer Jonathan Hill.

“I would like to welcome Anthony to the FAI and wish him all the very best in his new role with us.”

Anthony enjoyed a lengthy career as a midfielder in the Football League which saw him make over 270 appearances in a 13-year spell.

His coaching career began at Accrington Stanley before moving to Wigan. Paul Cook brought him into the Latics as a first-team coach where they secured the League One title in the 2017/18 season. Following this success, Frank Lampard named Anthony as a first-team coach at Chelsea at the start of the 2020/21 season and has remained an integral member of the first-team coaching staff under Thomas Tuchel.