LEADING amateur jockey, Patrick Mullins, has confirmed he will make his mind up over the weekend or early next week about whether he will turn professional so that he can ride for his father, Willie, at Cheltenham this year.

It comes as authorities confirmed amateurs will be banned from the Festival due to government restrictions on grassroots sports.

“Obviously I am very disappointed. I have an exceptional book of rides over there. I have two favourites in Kilcruit (Champion Bumper favourite) and Billaway (Foxhunters Chase). I have Sharjah who is a very good ride in the Champion Hurdle. I am very disappointed so I suppose I have to give serious thought about whether my hand is forced to turn professional in order to take those rides,” he said.

He is also set to ride Melon for his father in the Ryanair Chase while he is also certain to would have had some nice spares over the four days of the Festival.

“It would be a big decision so we are going to have to think about it over the next few days and weigh up the pros and cons.” 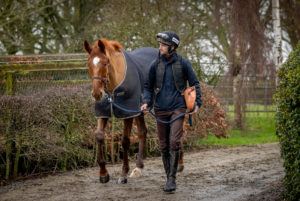 Patrick Mullins with Melon at Closutton but it remains to be seen whether he will be able to ride him at Cheltenham
Photo: ©INPHO/Morgan Treacy

The reason for joining the professional ranks are easily identified. Apart from a list of quality rides, he and his father form a dynamic team. Patrick also knows Willie’s horses almost better than the champion trainer does himself.

The Cons are also quite clear.

“Obviously I would lose this year’s amateur championship (before the weekend he was two winners ahead of Jamie Codd). Turning professional, I wouldn’t be doing it out of choice if you know what I mean,” Patrick admitted.

Patrick says his father is set to let him make the decision himself.

“We have to sit down and talk about it. He is willing to go with whatever I think.”

The decision by the British authorities to ban amateur riders means other leading Irish amateurs such as Codd and Derek O’Connor will not be going to the Cotswold venue this year. They have announced they will not turn professional.

“I am not sure what the conditions are. The committee can impose different conditions on different people regarding the circumstances. It is not a black and white rule,” he says.

Meanwhile the racing world is in mourning for Tom Foley, who passed away during the week. The Aughabeg and Carlow trainer will forever be associated with the exploits of Danoli on both sides of the Irish Sea. Patrick admitted he was captivated by Danoli’s career, including his win in the Sun Alliance Novice Hurdle in 1994 under Charlie Swan. In later years Carlow jockey, Tommy Treacy, partnered Danoli which featured further victories at Aintree, Gowran Park and Leopardstown.

“He was a very straight talker. A lot of people respected him for that and there wasn’t many like him.”