Controversial handball rule to be changed

THE International Football Association Board (IFAB) have confirmed today that the controversial rule that meant a handball in the build up to be a goal or goalscoring opportunity was automatically an offence is to be changed from 1 July.

“Accidental handball that leads to a team-mate scoring a goal or having a goal scoring opportunity will no longer be an offence,” said IFAB in a statement at their AGM today.

The handball rule as it stands was again under the spotlight on Thursday night when Fulham had a goal disallowed against Spurs in the English Premier League but the new rule will impact the game at the highest level right down to the Carlow Soccer League and Underage League. 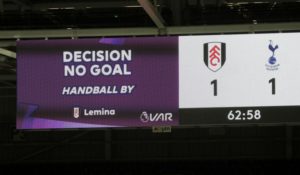 However, handball will still be considered an offence if a player scores in the opponents’ goal:

“Various changes and clarifications to the Laws of the Game were agreed at the AGM, with a particular focus on Law 12 – Fouls and Misconduct.

As the interpretation of handball incidents has not always been consistent due to incorrect applications of the Law, the members confirmed that not every touch of a player’s hand/arm with the ball is an offence. In terms of the criterion of the hand/arm making a player’s body “unnaturally bigger”, it was confirmed that referees should continue to use their judgment in determining the validity of the hand/arm’s position in relation to the player’s movement in that specific situation.

Following this clarification, it is a handball offence if a player: