Daly to feature for Connacht 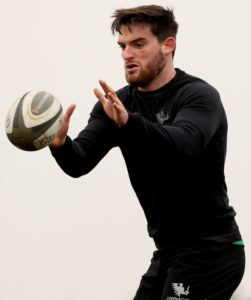 Tom Daly in training with Connacht this week ahead of Friday night’s game against Munster
Photo: ©INPHO/James Crombie

Aki, along with Dave Heffernan and Ultan Dillane are named in the name by Andy Friend after being released from the Irish Six Nations squad

That trio are part of an experienced line up, nine of the starting XV have made over 100 appearances for Connacht, Daly makes his 41st appearance.

Speaking ahead of the game, Head Coach Andy Friend said that Connacht are focused on getting the win they need to fulfil their ambitions, as they look to extend a club record of five successive away wins.

“We know exactly what we need to do in Limerick. There has been barely any talk of securing Champions Cup qualification because our first objective has always been 1st place in the Conference B, so all our focus since last weekend has been on getting a win that gives us that fighting chance of a final spot,” Friend told www.connachtrugby.ie.

Regarding his team selection, Friend added:

“Thankfully we haven’t picked up any major injury worries in our last two games so we’ve a pretty healthy squad apart from our long-term absentees. We’ve named a very experienced starting XV but we’ve made sure to also reward those who showed good form in our last few games. Overall we’re in a positive place and we’re really looking forward to the challenge.”

The game kicks off on Friday evening at 7.35pm.