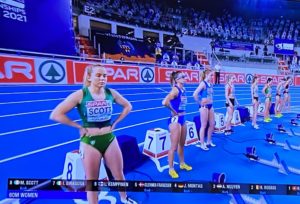 MOLLY Scott was very unlucky not to to progress through the heats of the 60m at the European Indoor Athletic Championships in Poland this morning despite running a good a time of 7.37.

Her time would have been good enough to finish in the top four and an automatic qualifying place in three of the five heats, indeed, her team mate Ciára Neville qualified for the semi-finals after running the same time.

As well as the top four in each heat, the next four fastest times qualified for the semi-finals and Molly was just 0.01 of a second away from being one of those. Very unlucky but Molly can be proud of a good performance at a major championships.