ED Byrne is this morning linking up with the Ireland squad ahead of next weekend’s Six Nations clash against Scotland.

The Carlow man played almost an hour and scored a try as Leinster defeated Ulster over the weekend to reach the Guinnes Pro14 final but his thoughts will now turn to impressing Ireland Head Coach Andy Farrell. 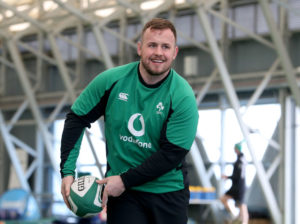 Ed Byrne is back with the Ireland squad this morning
Photo: ©INPHO/IRFU

After not making the matchday squad for the first game against Wales, Byrne earned his fourth international cap off the replacement bench against France. However, even though regular loosehead prop Cian Healy didn’t start the third game against Italy, Byrne didn’t make the squad with Dave Kilcoyne preferred in the number 1 jersey. Munster’s Kilcoyne is again in the squad along with the veteran Healy so it would that it will again be two from that trio in next weekend’s squad.

Elsewhere, Ulster’s Jacob Stockdale returns to the squad having missed the opening three rounds through injury while Shane Daly will remain at Munster.  The 36 man squad will travel to Edinburgh on Friday ahead of playing Scotland on Sunday at BT Murrayfield.