AHEAD of our game against University of Texas at El Paso, each player knew we would have to battle to get ourselves back in the running to win our conference. All week we were working on starting with intensity, a running theme in both of our previous losses. We were determined to become a team that sets the tone, not one that adjusts to the opposition’s tempo. This was a success in our game on Saturday. 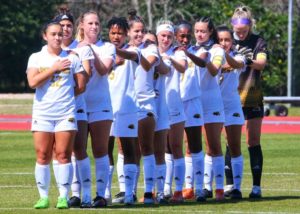 From the very beginning, we were on the front foot. Pressing high and keeping the opposition deep in their half. The pressure was at times hard for them to handle. Resulting in plenty of corners for us, early on in the game. With plenty of chances coming and going, we capitalized on a corner when our centre-back, Caitlin Pierce, a senior, got on the end of a cross with a perfectly timed volley. We were now 1-0 up. The game was an intense battle, with plenty of fouls for both teams. Each team was desperately trying to get a hold of the game, but fortunately for us, UTEP’s grip was slowly loosening. Joannie Ramos, another senior, delivered a lofted cross from a free-kick directly onto Aubrey Olin’s head. All she had to do was flick it past the keeper. It was now 2-0 at the break.

During half-time, our coach told us that we need to play at that same intensity in the second half to secure the win and put the game away. With this in our minds, we came out fighting and ready to leave our stamp on the game. During the game, I had to switch between four different positions, a skill that I have developed since coming to the States. While I was on the left-wing, in the second half, I was delivering crosses into the box and trying to create chances. After this immense effort, we succeeded in increasing the scoreline with a great solo effort by senior, Alice Campos, who increased the gap to 3-0. In the 78th minute, the opposition responded with a goal from a scramble in the box after a corner. However, this retaliation was not enough for them, as we managed the game well and it ended 3-1.

It takes a lot to bounce back and stay focus when things don’t exactly go your way. Over the last couple of weeks, our team has shown determination and grit all in the effort to push each other to be better. In college soccer, simply getting by is not enough. You have to push yourself to better than everyone else. When you have a team where all 25 players are collectively trying to just that, there’s no doubt that you’ll eventually get back on track.

Next week we’re away at the University of Texas at San Antonia, at 7 pm CST.

Controversial handball rule to be changed