Elliott affair leaves an uneasy feeling on many levels

Take thou what course thou wilt!

AS the Gordon Elliott photo saga drifts away from the headlines, it leaves a sorry mess behind. Many, many individuals, if they put a mirror up in front of them, will surely be left feeling somewhat uneasy with what they see in front of them now. The rush to condemn eventually abated and in its place a sense of dignity and fairness was allowed to enter. 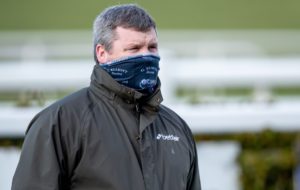 Let it be said, the photo was distasteful to the extreme. If the horse trainer had sat down on the horses hind-quarters with his own legs on the ground and hunched over in an effort to make himself heard over a phone with a poor signal that might have been considered as mitigating circumstances. And that is only a might. This was obviously not the case here but to be caught straddling the unfortunate dead horse, giving the thumbs up to whoever was in front of him and appearing to be not in the least bit upset over the dead animal was damaging to the extreme. It portrayed the trainer as a cruel, uncaring, disrespectful and callous individual.

Yet anyone who knows Gordon would say the horse trainer was never any of those. Many people have come out and said the man in the photo is not the man they know. On the other hand, could the person who actually took the photo or the person who posted it on social media be able to say he or she was none of the above? In the interests of public interest some photos are printed on media forums but here the purpose of the publication of the photo was to do as much damage to the horse trainer as it possibly could. And it succeeded in doing so.

First in was Betfair as the on-line gambling operator cut its ties with Elliott. There is an irony here. Admittedly, there is a symbiotic relationship between the sport of racing and the gambling industry. One feeds off the other. Yet gambling addiction can ruin a person’s life. More than 230 people sought help with a gambling addiction in Ireland in 2019 according to a report released from that the HSE. That figure is rising year on year and yet is believed to be only the tip of the iceberg with the figure estimated to be only 7% of the problem. The big gambling companies, when advertising their product, say you have to be over eighteen and that you should gamble “sensibly”. Essentially, that is only window dressing and is only fulfilling legal obligations. There is a dark element to sections of the betting industry. Not all addicts get their fix through horse-racing. You could argue gambling addiction and Elliott’s photo are not connected but it is a classic case of “he who is without sin can cast the first stone.”

Former Grand National and Gold Cup winner, Mick Fitzgerald was visibly emotional when interviewed on television about the matter. He said he initially thought it was a fake photograph but he went on to reassure viewers that horses get the best possible attention from everyone in the racing industry. In a way he hung the Irish horse-trainer out to dry but his reaction was understandable. He was one of the first to be interviewed on the matter. What else could he say?

As the week drew to a close, the social media, having crucified Elliott, then turned their attention to Fitzgerald and Ruby Walsh with the latter saying he was left “angry, embarrassed and very sad” after seeing the photo. The pair are taking part in an Irish Examiner Cheltenham Preview Virtual Event 2021 next Friday but when it was promoted on social media over the weekend the two former jockeys and now TV analysts were accused of being “hatchet men”. And that was probably the kindest comment made about them. Once again by the social media gang.

Going back to Julius Caesar. Incited by Mark Anthony, the mob in the aftermath of the assassination of the Roman Emperor was not willing to listen to reason. They wanted a head and didn’t care where they got it. Rampaging through the streets they came across one man who happened to be in the wrong place at the wrong time.

To no avail he pleaded for his life.

I am not Cinna the conspirator.

It is no matter, his name’s Cinna; pluck but his
name out of his heart, and turn him going.

Tear him, tear him! Come, brands ho! fire-brands:
to Brutus’, to Cassius’; burn all: some to Decius’
house, and some to Casca’s; some to Ligarius’: away, go!

It has been an horrific week for Elliott. A split moment in time when he posed for a photo two years ago. He was pilloried by the social media mob while the criticism rained down on his head through normal media channels. He has previously admitted he is a self-made man who came in at the very bottom but through hard work he has brought himself and his staff to the very top of the horse-racing game. His major feats include victory in the Gold Cup with Don Cossack, a Royal Ascot victory with Commissioned in the Queen Alexandria Stakes and of course two Grand National successes on Tiger Roll. Without the brilliant Willie Mullins he would surely be champion trainer on at least two occasions by now.

Somewhere along the line the trainer has made an enemy. Or maybe it is just old-fashioned begrudgery and a desire to bring someone down. In the hours and days as the story unfolded, there were those who felt the situation could break the horse trainer. So much so that flat jockey, Mark Enright, tweeted the following.

“I once found myself at death’s door due to my mental health, I was lost, scared and felt very alone. Gordon Elliott is human, he made a mistake. Nobody is perfect but nobody deserves to be pushed to that door. Anger will pass but life can never return.”

In the immediate aftermath and as the week progressed the whole situation ebbed and flowed. Gigginstown House Stud and leading owner, Michael O’Leary, announced that despite the publication of the photo they will continue to support Elliott. Another owner, Philip Reynolds who owns Presenting Percy, says he is standing by the beleaguered trainer and is leaving his horses in the yard. That didn’t stop Reynolds saying how disappointed and shocked he was to see the photo. He was entitled to say that and was one of those who appears to have behaved impeccably. He clearly didn’t feel it was a case of going to the hanging judge seeking to apply the ultimate punishment.

The yard is not so lucky with Envoi Allen with its owners, Cheveley Park Stud taking seven other horses away from Elliott. One can only imagine how shattering a blow that was for his groom, Seanin Mahon, and the rest of the staff who were looking forward to accompanying their star to Cheltenham.

The tide is turning now. Initially there were fears, for the jobs of the staff (80-100) but it looks as if they are unfounded with the announcement Denise Foster is going to take over training responsibility from Elliott on a short-term basis. The year long suspension imposed on Elliott, with six months of that suspended, is probably as little as he could have hoped for. It also looks as if he will still be in a position to have an influence with the running of the business but that is still not certain.

And if there was to be a happy ending to the week it came in Navan on Saturday when Team Elliott and the Camilla Sharples owned Kruzhlinin won the veteran handicap chase. The three-mile event was limited to horses ten years and older. The winner was the oldest of the thirteen starters. It probably wasn’t an accident to see Sharples, who is also travelling head running out to congratulate the winning jockey and give the horse a big hug. If ever there was a sign of unity in the Elliott yard this was it and Sharples said as much in a TV interview afterwards.

“I don’t think I’ve ever had a tougher few days in my life,” she said

“It’s been awful to see everybody so low, but we’re all a big team in Gordon’s, he’s a brilliant boss and I know he’s going to come back from this.

“We’re all going to stick by him, he’s got the best team around him so we’ll keep kicking,” said the Cullentra based travelling head.