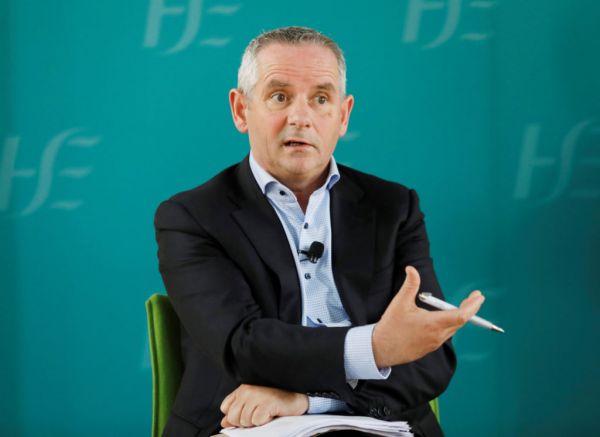 The chief executive of the HSE, Paul Reid has said it is “bizarre” the health board is being held responsible for missed vaccination targets and not the suppliers.

Mr Reid was particularly critical of AstraZeneca, saying the HSE’s confidence in the company had been “rocked” after a series of missed delivery targets.

Taoiseach Micheál Martin has sought a meeting with the AstraZeneca CEO next week, to discuss the issues around production and supply, a move backed by Mr Reid.

Mr Reid cast doubt on whether the supplier will be able to meet its full commitment to supply 377,000 vaccines by the end of the quarter.

“There was one delivery where we would be expecting 52,000, and we would get an early forecast, sorry that’s 26,000 and then very shortly before that we’d get an indication that it’s less than 10,000.

“That’s the environment which we’re trying to operate in, and we’re being held accountable for missing our targets which is bizarre,” Mr Reid said.

“We’re delivering, it is delivered efficiently, effectively and safely within a very reasonable timeframe for everything that we get.

“We’ve demonstrated that since the first week of this campaign.

“We’ve obviously been keeping the Taoiseach and everybody else informed of the unpredictability of the supply.

95 per cent of what we get in any given week is administered within that week.

Mr Reid said the shifting delivery schedules are impacting on the HSE’s ability to effectively administer the vaccines.

“We are operating in very real time in our distribution of vaccines. You know, 95 per cent of what we get in any given week is administered within that week.

“In fact at times it’s 95 per cent within three days of distribution and administration” he said.

He said that in recent weeks the HSE was given only 48 hours’ notice that vaccines to be administered over the weekend would not be available.

The HSE has forecasted between 75,000 to 85,000 of vaccines will be administered next week, but Mr Reid admitted that there has been no clarity from AstraZeneca if it will meet its delivery targets for next week.

Right now, people aged 80 and older are being offered a free COVID-19 vaccine. You don’t need to register in advance. When your vaccine is available, your GP will let you know. Visit https://t.co/cC4nQ2Dbxq #HoldFirm #CovidVaccine pic.twitter.com/UJoxWFvfMj

He said: “There has been dialogue with them again today to get clarity. I don’t have that clarity on confirmation of deliveries for next week.

“That’s the level of detail we’re dealing with right now, ‘what is next week, can you confirm it?’

“Our conference levels have been fairly rocked with them in terms of delivery and supply.”

AstraZeneca came in for heavy criticism in the Dáil earlier on Thursday, with Tánaiste Leo Varadkar questioning how the company was able to meet its commitments to the United States and the UK, but not the EU.