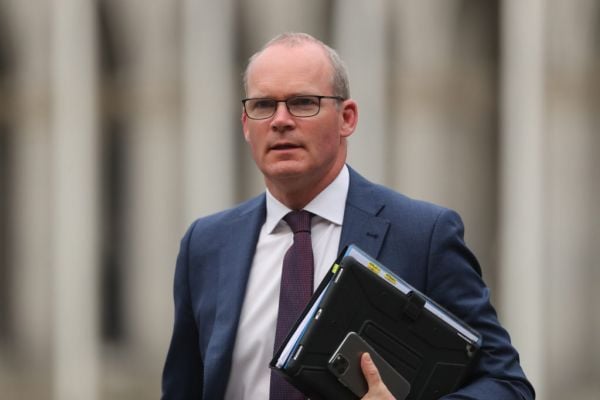 Ireland’s Foreign Affairs Minister has spoken about the growing tension between the EU and the UK over Brexit to an influential group of US Congress members.

Simon Coveney and EU Commission vice-president Maros Sefcovic spoke to the Friends of Ireland caucus on Wednesday, including its chairman, Congressman Richard Neal.

The group discussed Northern Ireland and concerns around the UK’s extension of post-Brexit grace periods.

Today, Minister @simoncoveney and @EU_Commission VP @MarosSefcovic met with the Friends of Ireland Caucus in the US Congress. The meeting was an opportunity to brief the Caucus on the latest EU-UK developments. See: https://t.co/Vvx1G0Yc07 pic.twitter.com/xeFV9qASwA

The British government announcement last week that it was unilaterally extending a series of grace periods to allow businesses in Northern Ireland more time to adapt to the new rules.

The European Union is set to launch legal action against the UK this week.

Mr Coveney said he and Mr Sefcovic told the group of tensions around the Northern Ireland Protocol as well as the “divisions and polarisation” of politics in Northern Ireland.

He added it has caused a strain on the relationship between the EU and the British government.

Mr Coveney told RTE Morning Ireland on Thursday: “We talked for about an hour-and-a-half about the protocol, its implementation, the tensions around that, the mistakes that have been made by both sides.

“The need to try to re-engage in discussion, because without finding a way forward through dialogue, which of course has to be the preference for everybody, then Maros Sefcovic outlined that the EU side really has no option but to take legal action, which will begin this week.”

Mr Coveney said politics is “very strained” in Northern Ireland because of perceptions around the protocol and its implementation.

“My job is to ensure that what has been agreed, as a mechanism to deal with the disruption that Brexit causes on the island of Ireland, which is the protocol, is part of an international treaty, as part of international law,” Mr Coveney added.

“Last December, Maros Sefcovic and Michael Gove, who is a very senior person in the British government, agreed an implementation plan and an approach to implement the protocol, and we are simply saying that we need to ensure that that happens now.

“Of course, the EU has been considering and will consider further if flexibilities need to be accommodated, if there are genuine problems in terms of implementation, how we solve them.

“But that has got to be done collectively between the EU and the UK.

We cannot move forward on the basis of one side just deciding unilaterally ‘Well, this is what must be done’

“We cannot move forward on the basis of one side just deciding unilaterally ‘Well, this is what must be done and we can’t wait for the other sides to agree with us’, and that’s essentially what the British government has done.”

However, the Minister believes other avenues should be explored to resolve the issues.

“The way to manage relationships between unionist leadership and the Government here in Dublin is not through legal challenges, it’s through working together and collaboration,” he added.