Government has responsibility to ‘investigate and address’ illegal adoptions 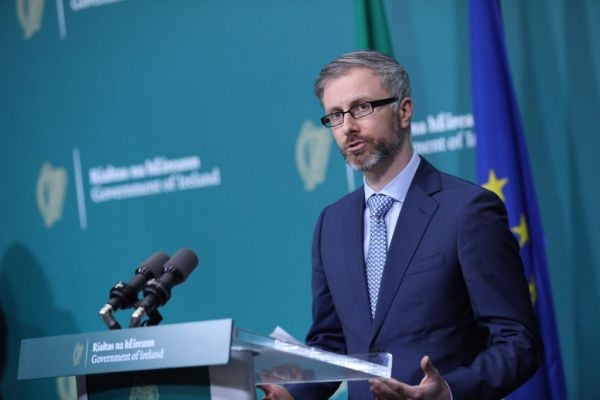 The State has a responsibility to “investigate and address” the issue of illegal birth registrations, the Children’s Minister has said.

Roderic O’Gorman has insisted that Government will not ignore the issue, with the special rapporteur for child protection, Professor Conor O’Mahony, to advise them on the next steps in the process.

An independent review into the issue of illegal birth registrations in Ireland published this week found there could be potentially up to 20,000 suspicious cases.

The review recommended against a full Government inquiry on the grounds that it could cause further trauma to those affected.

However, on Thursday Minister O’Gorman said that review “did not end the responsibility of the State to continue to investigate and address the issue of illegal birth registration”.

He said: “We have created human rights and child protection mechanisms in the State, I think it’s right that the Government rely on them and use them to provide advice in situations like this.

“Situations where we have incredibly complex and incredibly ethically difficult issues, particularly in the context of illegal birth registrations.

“My department will be engaging directly with Professor O’Mahony in terms of the terms of reference for the work he’s going to undertake over the next six months.

“But we are very clear, it will be a broad term term of reference.

“We’re asking him to provide advice to Government on what are the next steps here.

“We have the sampling review.

“The sampling review came back and said it didn’t advise a review on every single file, all 150,000 files that were there.

“We’re asking Professor O’Mahony to consider that, and consider any other issues he feels are relevant.”

The probe, which was triggered in 2018 after evidence of illegal registrations were discovered in the files of the St Patrick’s Guild Adoption Society, did however find evidence “suggestive” of incorrect registrations in a significant number of files.

As part of the review, Tusla and the Adoption Authority examined records of 30 agencies, including adoption societies and nursing homes.

If the number of markers “suggestive” of incorrect registrations is extrapolated over the 70,000 files held by Tusla, it could potentially amount to 20,000 records.

Prof O’Mahony told the Irish Times that “doing nothing is not a credible option” for the State when it comes to investigating illegal adoptions.

“These were potential markers that may indicate illegal birth registrations.

“And that’s why they decided to take further steps, to get the advice of Professor O’Mahony in terms of what we do next on this particular issue.

“As I said before, the responsibility, the duty on the State here has to be exercised so carefully and ethical considerations.

“Because we’ve seen from the Primetime Investigates programme, the massive impact that it has on an individual, when they are informed that they’re not who they thought they were.

“The State has to do a lot more to, and we are in the process of doing more to bring in legislation to actually address the real individual difficulties it causes in terms of their identification, ratification of identity documents, ability to avail of succession law and inheritance law.”

The Minister’s comments came at a press conference at Government buildings, where he announced a reduction to education fees for students in Direct Provision.

It will see existing fees of 3,600 euro for access to post Leaving Cert courses for international students waived for students in Direct Provision from the start of the 2021/22 academic year.

Today, @SimonHarrisTD and I announced that international protection applicants will no longer have to pay international fees (€3,600) to access PLC courses.

Improving access to education is a key goal in creating a new model of protection that supports integration from day one. pic.twitter.com/xZJwWCYVlC

Additional English language classes will be provided to those seeking to continue into postgraduate courses.

Higher Education Minister Simon Harris said the scheme will cost in excess of 10 million a year.

Minister Harris said: “The Government has now set out its vision to end direct provision and I strongly support that goal.

“It is my role as Minister for Further and Higher Education to ensure there are no barriers for people living in direct provision to accessing third level.

“Last year, we removed some of the obstacles to the student support scheme which led to a fivefold increase in the number of applications and grant holders.

“I am planning to undertake a further review of the scheme in 2021.”