Son who decapitated mother in Louth home jailed for life 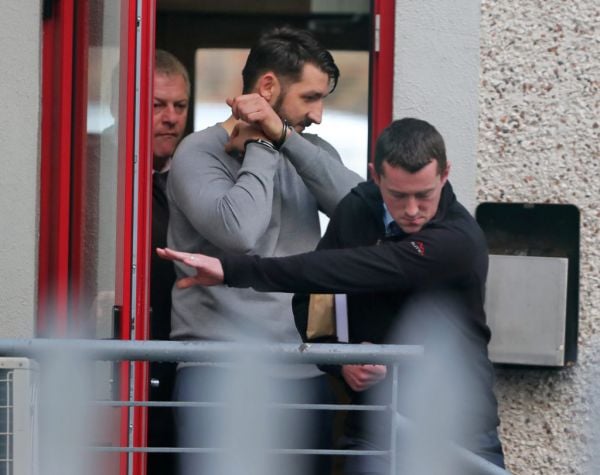 A 35-year-old man who decapitated his mother in her Louth home has been jailed for life after he pleaded guilty to murder this morning.

Tomasz Krzysztof Piotrowski, who had previously lied to psychiatrists in an attempt to get a diagnosis of schizophrenia and a lesser sentence, was arraigned before and sentenced by the Central Criminal Court less than a week after he was deemed fit to stand trial.

Piotrowski, originally from Poland but with an address at Cherrybrook, Ardee, Co Louth, pleaded guilty to murdering his mother Elzbieta Piotrowska (57) on January 8, 2019 at her home in Clonmore, Ardee.

Mr Justice Michael White noted the case was the second in a matter of months, where long-term drug addiction had led to a drug-induced psychosis that resulted in “the most horrific of tragedies”.

Ms Piotrowska’s decapitated body was found in her home that morning. She had suffered a significant number of stab wounds and an axe and a number of blood-stained stanley knives were found close to her body.

Piotrowski was arrested on the same day and was subsequently deemed unfit to be tried having been assessed by psychiatrists at the Central Mental Hospital (CMH) in Dundrum, Dublin.

However, Mr Justice White deemed Piotrowski fit to stand trial last Friday after hearing evidence from two consultant psychiatrists who had disagreed on the issue. Delivering judgment, the judge said he was satisfied that the Polish man could find his way around navigating a plea, follow the evidence and make a proper defence.

Giving evidence today, Superintendent John O’Flaherty said Ms Piotrowski’s friend had found her body lying in a quantity of blood in the hallway of her house.

The head had been removed from the body, and it was further down the hallway, he said, adding that a broken part of the knife’s blade was also found on the deceased. There were multiple stab wounds to her shoulder, neck and right arm and the cause of death was decapitation.

Sentencing Piotrowski to the mandatory term of life imprisonment, Mr Justice White said this was the “most tragic of cases” and Ms Piotrowski and her husband of forty years had come to Ireland as hard-working Polish people in 2008.

There was no doubt from the evidence that Piotrowski had intentionally set out to murder his mother and had planned to do so, he said.

“This is the second case in a matter of months, where it’s obvious that long-term drug addiction induces serious problems for those who engage in it including a form of psychosis which is drug induced and this led to the most horrific of tragedies,” he added.

At a hearing last December, prosecution counsel Dominic McGinn SC, with Tom Neville BL, told the court that Dr Mary Davoren had decided Piotrowski was fit to stand trial following a consultation with him the previous month.

During the consultation, Piotrowski accepted that he had lied to psychiatrists in order to get a diagnosis of schizophrenia and a lesser sentence.

In her evidence, Dr Davoren said she was satisfied that the accused was able to describe the various plea options available to him, had a good understanding of them and met the criteria for fitness to stand trial.

The doctor said Piotrowski had told her that he had considered a plea of not guilty by reason of insanity but said he did not want to spend a long time in the CMH.

However, consultant psychiatrist at the CMH Dr Conor O’Neill disagreed. He told counsel for Piotrowski, Roisin Lacey SC, that he believed the accused was still suffering from delusional beliefs, that his symptoms are most likely the result of paranoid schizophrenia and that he was not fit to plead at his trial.

Dr O’Neill said the defendant continued to hold a range of delusional beliefs including that the deceased is not his real mother but a witch who used black magic to harm him. He said the accused was actively psychotic, did not have the capacity to instruct counsel and was not fit to be tried.