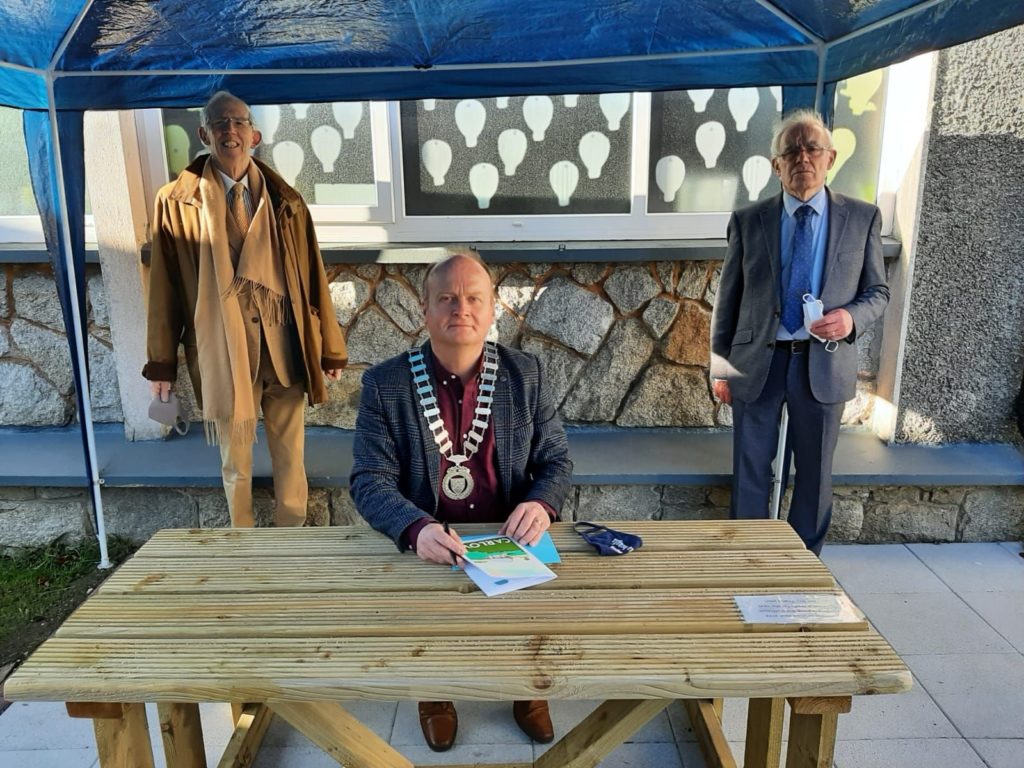 A LETTER from Mayor of Carlow Fergal Browne has been sent to US President Joe Biden expressing St Patrick’s Day greetings and emphasising to the leader of the free world the strong links that exist between Co Carlow and the United States.

The content of Mayor Browne’s correspondence makes a compelling case why President Biden should include Co Carlow as part of his itinerary on any future visit to Ireland.

The letter was dispatched to 1600 Pennyslvania Avenue, Washington DC on Monday 1 March.

The letter was enclosed in a small, tastefully crafted colour brochure drawn up by local artist Derry Dillon. The cover painting is of the Browneshill Dolmen, while the greetings page carries colour photos of three Carlovians with significant links to the USA.

The page features the following Carlow men of note: Pierce Butler from Garryhundon, Carlow, a US founding father; distinguished international physicist John Tyndall, a native of Leighlinbridge; and another Leighlinbridge man, soldier Myles Keogh of the US 7th Cavalry, who fought and died at ‘Custer’s last stand’.

Mayor Browne outlined the links Carlow has to ‘The land of the free and the home of the brave’.

The Carlow mayoral letter states: ‘Our most famous Carlovian was the world-renowned physicist and Alpinist John Tyndall. The blue sky is named Tyndall blue after him and he also wrote about the greenhouse effect on the ozone layer almost 200 years ago.

‘John Tyndall spent two years in America in 1872-73 and he raised large sums of money for the Ivy League universities. President Ulysses Grant (the 18th US president) and various senators and congressmen attended his lecture in Lincoln Hall.’

Cllr Browne’s letter noted that Pierce Butler was involved in writing the US Constitution and devised the electoral college system.

The letter further highlighted the fact that Myles Keogh served as a cavalry officer during the Gettysburg campaign and died while fighting with General George Armstrong Custer at the Battle of the Little Bighorn, Montana on 25 June 1876.

The letter refers to the hope among Irish people for President Biden to visit this country. On any such trip to the Emerald Isle it would be a great honour if he visited Co Carlow ‘as we have great connection between our two jurisdictions’, the Carlow letter states.

Randal has visited the Tyndall memorial in the Swiss Alps, erected by the scientist’s wife and local people.

A bronze plaque on the memorial states: ‘John Tyndall British scientist.’ This greatly irked Randal, who says that in the coming days the word ‘British’ is to be changed to the word ‘Irish’, to set the record straight!

The Tyndall Memorial (the Tyndalldenkmal) is 2,351 metres (7,680 ft) above sea level and Tyndall had an Alpine summer house just above the local church.

As a response is awaited to the White House letter, Mayor Browne, Martin Nevin, Randall Dempsey and Norman McMillan are all of the firm belief that Carlow’s claims in terms of strong historical links to the USA should have the Dolmen County included as a location for President Biden whenever he decides the time is right to cross the Atlantic to renew contact with his Irish roots.