Varadkar: We believed lockdown would be six weeks or a few months at most 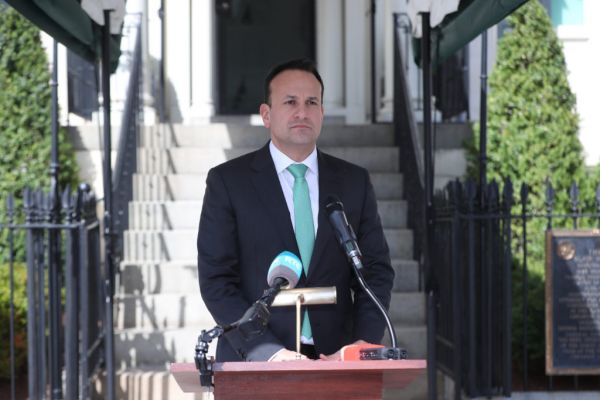 Tánaiste Leo Varadkar has admitted that he expected Ireland’s lockdown to last for no more than a few weeks or months, one year on from his infamous Washington speech.

It is exactly 12 months since the then-Taoiseach addressed the Irish public from the steps of Blair House in the US capital and told them: “I need to speak to you about coronavirus.”

Mr Varadkar said he had “no concept” at the time that some businesses would remain shuttered one year on, and paid tribute to the inspiring perseverance and courage of the Irish people.

He said: “I remember vividly standing on the steps in Washington for St Patrick’s Day last year. Visits to the White House are always special, but this one is etched in my memory.

“We knew so little about the virus at the time. Now we know so much more, but even so we are still learning.

“At the time there was no road map, no manual for dealing with a pandemic.

“The previous pandemic had occurred around 100 years previously, at the start of the twentieth century, and it was influenza not coronavirus.

“Even the WHO and the ECDC had large gaps in their knowledge, despite years of scenario planning. So we took decisions based on the best advice available, and by instinct.”

That day he announced the closure of all schools, colleges, childcare services and cultural institutions until March 29th — with pubs, restaurants and nightclubs soon to follow.

Mr Varadkar said: “The first lockdown that I announced from Washington was for just two weeks, and we believed that the full effect would be for perhaps six weeks or a few months at most.

“We had no concept that one year later some of those closures would still be in place, such as nightclubs and pubs in Dublin.”

The Tánaiste said he has been struck by the resilience of the Irish people over the last year.

He told the PA news agency: “A few things have made a really big impression on me in the last year.

“There is all the pain and suffering that people in Ireland and around the world have endured.

“But equally the perseverance and courage of Irish people has been inspiring. They have withstood extraordinary restrictions, and continue to do so.

“Huge numbers of Irish businesses have been closed for much of the last year, some of them for the whole 12 months.

“Families have been separated, friends cannot make contact. It’s been particularly hard on young people and those who have been bereaved.”

Mr Varadkar said that while the pandemic is not over, there is hope for the future.

“The hardest part is that we’re not at the end. However, as (World Health Organisation special envoy on Covid-19) David Nabarro said, we can see the light at the end of the tunnel, even if it’s still some way off.

“The vaccination programme, while slower than hoped for, is nevertheless making progress, with more than 100,000 people over the age of 80 having received a dose.

“We are coming into the summer when respiratory viruses find it harder to spread, and treatments are getting better.

“I used to say that I wanted the pandemic to be a lost year, not a lost decade. It looks like it’s going to be more than a year, but hopefully not much more than one.”

Mr Varadkar was strikingly upfront about the challenge facing the country when he spoke in March 2020.

“There will be many more cases. More people will get sick and unfortunately, we must face the tragic reality that some people will die,” he told a worried nation.

His message now is much the same as it was then.

“Ireland is a great nation. And we are great people. We have experienced hardship and struggle before.

“We have overcome many trials in the past with our determination and our spirit. We will prevail.”