OUR game against the University of Texas at San Antonio (UTSA) was my first away game with Southern Miss that required air travel. Our trip started early on Thursday, an eventful day where we had multiple flights to get to our destination. We had a two-hour bus ride from Hattiesburg, Mississippi to New Orleans, Louisiana. Then we had our first flight from New Orleans to Dallas, Texas. Then we had our final flight from Dallas to San Antonio, Texas. After our long day of traveling, we had a short 30-minute session to get our legs moving and ready for our game the following day.

The game kicked off at 7pm. We started strong and fast, with high intensity. We were awarded a throw-in very early in the game, where I had to hold up the ball and successfully got us a corner. After increasing the pressure from there, we scored in the second minute, Jenny Caracheo putting us in front at 1-0. We continued to keep our opponents under pressure, playing some beautiful football and creating some very good chances. In the 25th minute, senior Ariel Diaz, scored on the keeper after going through one on one, pushing us to 2-0. It didn’t stop there, before half-time Joannie Ramos, a senior, was fouled in the box. A penalty was given and Hailey Pohevitz, a senior, slotted it home past the keeper, making it 3-0 at the break. 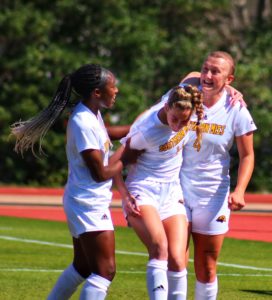 It was a good week for Blessing Kingsley and Southern Miss

However, UTSA came out battling hard and scored from a corner 30 seconds into the second half. This was obviously not the response we wanted but we had to remain composed regardless as they currently had momentum. I took the opportunity to try to slow down the game whenever I was on the ball, effectively breaking down their flow and keeping us in control of the game. This team response was crucial. If we continued to play frantically, we would have ended up conceding again and bringing them back into the game. To give credit where it’s due, UTSA never gave up, but their efforts were not enough as we closed the game out successfully. The result ending 3-1.

Beforehand, we knew that this game and result would be pivotal for how the rest of our season would play out. In order to be a real contender this season, we need to be cut throat and win the games that are ours for the taking. With that objective in mind, we succeeded in getting the result we needed.

As a player used to the more technical side of the game, I had great pride when we continued to play beautiful and exciting football in the first half regardless of how UTSA liked to play a very physical “up and down” game. We refused to step down and play like how they like to. We set the tone and the standard. The second half was a contest and we had to match them in the physical battle (a big part of their game) in order to stay in the game. At the end of the game our coach, Mohammed El-Zare, told us all in our postgame huddle, “I want you by my side when I go to war”. This was the highest compliment you want to hear after our battle. Every player left everything on the field and collectively, we got the job done.