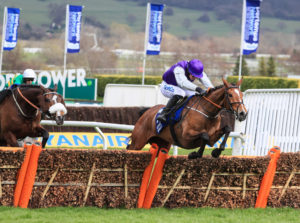 Trainer Paul Nolan was enjoying a third Festival victory and his first for a decade (Noble Prince in what is now the Marsh Novices’ Chase), while jockey Bryan Cooper was celebrating a ninth Festival success and his first since 2017 (Road To Respect in what is now known as the Paddy Power Plate).

Cooper told Racing TV: “It’s great. I can tell you it’s been a lonely couple of years walking out of this place without any winners when you get used to riding them.

“I had her grand early doors and she was jumping well, but I missed the third last and it just got a bit crowded and I just had to sit and suffer. I knew I had a bit of pace, so if I did get knocked back a pace or two, I would get there easy enough.

“When you’re riding for these men [the Nolans] they don’t really give you instructions – they told me this morning ‘you’ve ridden enough winners here to know’. It’s great, they’ve been massive supporters of mine over the last couple of years and without them, I don’t know if I’d be here today to be honest.

“It’s great and I just can’t thank them enough. Jim Coffey, the owner, you mightn’t hear his name but he’s putting a lot of money into our game at the moment and I think he’s going to get bigger – it’s just great for him.”

Speaking about his comeback and rebuilding his career, he added: “I had to start at the bottom and work my way up – there was nobody going to hold my hand and do it for me. I’m a big boy now and it was up to me to change things around and I’m just so grateful to be getting these rides, and to be riding for Willie here this week as well, and getting the opportunities. I just have to start enjoying it now again.”

When asked whether getting knocked back during the race helped, he added: “I was in no panic, I had Nico [de Boinville] in front of me on Nicky’s lad and I knew he would take me into it, so I ended up getting there. I thought they would take me a bit further, but I knew I’d stay as well and the loose horse helped me out.

“She took a bad fall at Leopardstown, but we’ve done plenty of schooling with her. I was a bit long at the second and she put down, so she learnt from her fall, which is very important, and I was happy as there wasn’t much daylight around her, but she was good.”

Lisa O’Neill, representing Denise Foster, trainer of runner-up The Bosses Oscar, said: “He ran a cracker. Jordan (Gainford) gave him a great ride, he’s very valuable for the 7lb claim, and I think the mare that bettered him is just a bit better handicapped.

“Hopefully there’s a nice race for him somewhere, we’ll have a look at the few festivals ahead but it’s great for the owners Noel and Valerie Moran to have something come into the winners’ enclosure here and hopefully we can go one better with Zanahiyr tomorrow.”

Jockey Jordan Gainford added: “That was a great spin, he jumped and travelled well. I thought coming down the hill I had a real chance and coming to the last we just met it a little tightly, but we ran a cracker. He loved the ground, jumped well and everyone is delighted.”

Tom George, trainer of third home Come On Teddy, said: “He’s run a good race and he’ll make a cracking novice chaser next season. I’m delighted with him. He likes it here and he stays well. It’s good for the Noel Fehily Racing Syndicate.”

Jockey Jonathan Burke added: “We had to drop in and take our time, as he’s a horse who can race on and off the bridle and if he’d got too keen he wouldn’t have finished, so it kind of went as we’d planned.

“He settled well and the only point I got stopped was three out, where there was a bit of traffic. There was plenty happening on the inside, but luckily I’d made the decision at the top of the hill to come out. I did get bumped, but no excuses – the winner won well.”