IT sums up the luck that Stephen Kenny has endured so far during his time as Ireland manager that the potentially key tie in Ireland’s World Cup Qualifying group is up first when his team play away against Serbia on Wednesday evening.

With Portugal the overwhelming favourites to top the group and take the automatic qualification spot, Serbia would appear to be the team that Ireland most need to fear in the battle to finish runners-up.

Defeat here would really put Ireland on the back foot before the group even got going and it just feels like everything is going against Kenny. This is the first of three games in a week Ireland and Kenny would surely have given his right arm for the chance to play Luxembourg and Qatar before the Serbia game. That would have given him the chance to work with his squad and have a closer look at his options.

As it is, he’ll only likely have one, two at the most, meaningful sessions on the training pitch before Wednesday’s game and finalising his starting 11 is going to be a difficult task. 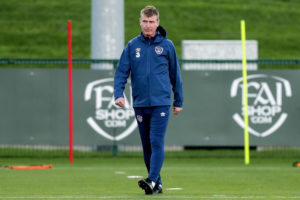 Stephen Kenny won’t have much time to work with the Irish squad on the training pitch ahead of the game against Serbia
Photo: ©INPHO/Laszlo Geczo

It appears that the decision of who starts in goal has already been made and Kildare’s Mark Travers will become the first man from his county to earn a cap in a competitive game since Mick Kearin in 1971. It’s far from an ideal situation to be throwing a young goalkeeper, who hasn’t played much this season, into such an important game. Travers caught the eye with a hugely impressive performance on his Premier League debut for Bournemouth in May 2019 but he has played precious few games since then.

This is though a chance for Travers to stake his claim for long term position between the posts. Dependable stalwart Darren Randolph is coming to the end of his career but Ireland have long term potential in Caoimhin Kelleher and Gavin Bazunu. Kelleher certainly showed what he could do on handful of appearances for Liverpool this season while Bazunu has done as well as he could during his first foray into first team football with League 1 strugglers Rochdale. Long term, Kenny will be very keen for at least one of Travers, Kelleher or Bazunu, or even Kieran O’Hara who is also in the squad, to establish themselves as a number one at as high a level as possible and create real competition for the starting place but for now, it’s Travers who will get the nod for this game. 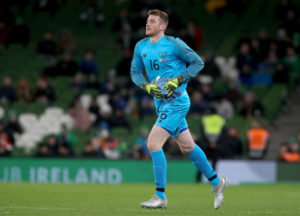 Defence is one of the easiest areas of selection for Kenny, or at least three quarters of it is. Seamus Coleman, Ciaran Clark and Enda Stevens seem certain starters but there is a big question mark over who will partner Clark in the heart of the defence. It shows the depths that Shane Duffy’s season has plumbed when there is such a debate over whether he will start. Under Martin O’Neill, Duffy was Ireland’s best defender and at times reached inspirational levels akin to previous central defenders like Richard Dunne. His dream move to Celtic has turned into a nightmare but moreso than his form, there is a bigger question over whether he suits the way Stephen Kenny wants to play. Looking back over Duffy’s career, concerns over his ability to play out from the back led to Roberto Martinez at Everton and Graham Potter at Brighton letting him go and Kenny’s philosophy wouldn’t be far from that pair. Duffy’s main contender for a starting place is West Brom’s Dara O’Shea, who is a rarity in this Irish squad in that he is playing regularly in the Premier League. West Brom look likely to be relegated but O’Shea has gained a lot of experience this season and played well in some high profile games, such as West Brom’s 1-1 draw against Liverpool at Anfield. He is hopefully the long term future of the Irish defence but for this game I’d like to see Duffy get the nod, even allowing for the various question marks about him. For all Kenny’s desire to dominate the ball, this is a game where Ireland are likely to be on the back foot and Duffy’s ability in the air could be important, in both boxes, particularly if Serbia start with powerful striker Aleksandar Mitrovic. 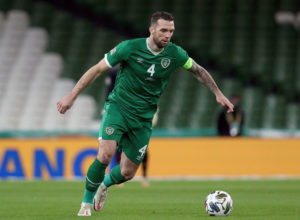 Shane Duffy has been an inspirational figure for Ireland but finds his place in the team under threat
Photo: ©INPHO/Bryan Keane

It’s further forward where things get really complicated for Kenny. The starting midfield trio is likely to come from the group of Jeff Hendrick, Alan Browne, Jason Knight and Josh Cullen, and who gets the nod will depend on what shape Kenny wants in that midfield. Ideally, the experienced Hendrick would be the first of that group to have their name on the team sheet but he has been in rotten form for Newcastle this season. Derby County are having a tough time of it too but Jason Knight has earned some rave reviews from Wayne Rooney, while Alan Browne is enjoying a solid season for Preston. The most interesting one from that group is Cullen. He is the type of ball playing midfielder who Kenny could potentially build his team around in the future. He has gone to Anderlecht in Belgium and all reports suggest he is revelling in the continental style of football and his ability to keep possession could be key in a game like this. Knight’s time will hopefully come but for this game I’d like to see Cullen at the base of a hard working midfield trio along with Hendrick and Browne. 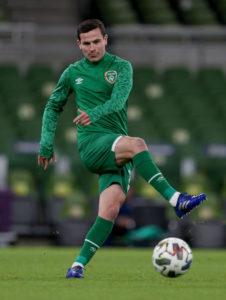 Again in the forward positions, Kenny finds himself hampered by injuries and picking from a group who haven’t exactly been in the best of form. In the absence of any flying wingers in form at a high level, this could be the game to play Matt Doherty ahead of Seamus Coleman. He hasn’t enjoyed the best of times since moving from Wolves to Spurs but Ireland need their best players on the pitch, even if they have to shuffle the pack to allocate them. Doherty’s inclusion on the right would allow Ireland to play a 4-3-3 formation while in possession but quickly and seamlessly switch to a 4-5-1, or even to a formation with five defenders, when without the ball. Aaron Connolly is another of the exciting young players that we are hoping will burst onto the scene but he has had his injury problems in recent weeks. If fit, he should start on the left with Robbie Brady a different sort of option there. Picking out this team has thrown up a Callum Robinson shaped problem. For me, as it stands in this squad, he is Ireland’s most likely route to a goal from open play. He has fallen right out of favour with Sam Allardyce at West Brom but he is pacy and has an eye for goal. I’d like to see him play through the middle with Connolly and Doherty on the wings but I feel that Kenny is more likely to pick a more physical target man in the number nine position, most likely James Collins with Shane Long also in the mix, so Robinson could end up on either flank. 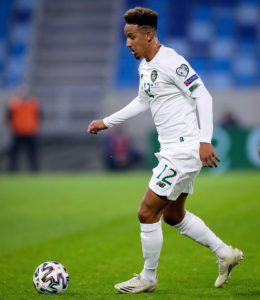 Despite a lack of game time with his club, Callum Robinson could be Ireland’s best route to a goal on Wednesday night
Photo: ©INPHO/Tommy Dickson

What is clear from the squad is that Kenny really has slim pickings to choose from. Injuries haven’t helped but even allowing for that, Ireland find themselves a time where they are waiting and hoping that the likes of Kelleher, Bazunu, O’Shea, Knight, Molumby, Cullen, Connolly, Parrott, Idah will blossom into first of all top class club players at a high level and then feed into the international team.

They aren’t at that level yet and when compare what Kenny is picking from to what new Serbia manager Dragan Stojkovic is choosing from and it’s clear that any sort of positive result for Ireland on Wednesday would be a fantastic achievement. There is talent that Ireland can only dream of in every area of the Serbia squad. Kenny can only dream of calling on players like Sergej Milinkovic-Savic of Lazio, Eintracht Frankfurt pair Luka Jović  and Filip Kostic, Dusan Tadic of Ajax or Serie A scoring sensation Dušan Vlahović of Fiorentina.

They are just some of the names that Ireland will have to contend with on Wednesday but Kenny is being judged in the harshest of terms and needs something positive to really kickstart his tenure. 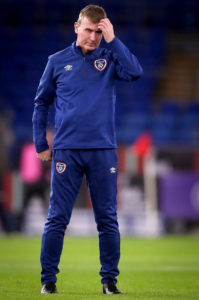 Ireland Manager Stephen Kenny would dearly love to start the World Cup qualifying campaign with a win over Serbia but that is a tough ask
Photo: ©INPHO/Tommy Dickson

Forget 2022 World Cup and look to the future