Leading horse trainer, Willie Mullins, has said the Cheltenham Festival success for Irish owners, trainers and jockeys has given the country a massive boost. The Irish raiders registered a staggering 23 winners out of 28 races with Irish winners sourced back to training yards both big and small across the country. 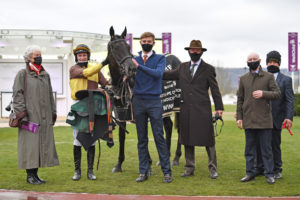 Willie Mullins and connections with Galopin Des Champs after winning the last race of the Festival, a win that secured yet Leading Trainer title
Photo: ©INPHO/Francesca Altoft

“It was a huge week for Irish bloodstock,” said Willie.

“A huge week for Irish trainers from all over the island. From Ian Ferguson (Galvin) in the north of Ireland all the way down to Denise Foster (Black Tears, Tiger Roll, Mount Ida), Noel Meade (Jeff Kidder), ourselves. Paul Hennessy (Heaven Help Us), in to Wexford, Paul Nolan (Mrs Milner). Jack Kennedy (Hotel Minella) in Dingle. The whole of rural Ireland got a huge lift. It shows how big an industry it is for the whole rural community in Ireland and for providing jobs. It gives a great sense of national identity.”

For the champion trainer, even though he was the leading trainer of the festival, he had to have had mixed feelings by the end of the week. Appreciate It (8/11 fav) and Monkfish (1/4 fav) justified their starting prices when winning the Grade 1 Supreme Novice Hurdle and the Grade 1 Novices Chase respectively but Chacun Pour Soi could only finish third in the Queen Mother Champion Chase. Al Boum Photo, who was going for a third Gold Cup in a row, ran his heart out but found the Henry de Bromhead pair of Minella Indo and A Plus Tard too good for him. Concertista, in the Mares Hurdle (Grade 1) had to settle for second place behind surprise winner, Black Tears, who was trained by Denise Foster.

Yet from the extended family point of view, two of his nephews triumphed at Cheltenham for the first time with Danny riding Flooring Porter to victory in the Paddy Power Stayers Hurdle for Gavin Cromwell and Emmet training The Shunter who won the Paddy Power Plate Handicap Chase (Grade 3).

“Disappointing Patrick wasn’t allowed to ride over there. We had a few disappointments ourselves but then we had some big successes. Appreciate It was very good. We had ups and downs ourselves. It was great to see Danny having his first winner and Emmet too. And Paul Hennessy of course from Goresbridge (Heaven Help Us in The Coral Cup). That was a tremendous victory. Henry de Bromhead of course. Lots of achievements. That was the huge thing about it. The spread of victories was so big across the country,” Mullins enthused.

The Closutton trainer confirmed Chacun Pour Soi came out of the race well.

“Maybe we should have more faith in him and let him do more. We might try something different with him. Then he was beaten by a filly (Polly Put the Kettle On) who was unbeaten around Cheltenham. She can hardly win in Ireland yet seems very good in Cheltenham,” he mused.

Mullins acknowledged Al Boum Photo did all that was asked of him but found two better on the day.

“The winner was very unlucky last year (in the Festival Novices’ Chase) and A Plus Tard’s form was very good in Ireland, so we’ve no excuses. Our fellow ran a cracker of a race and it was a great race for the three horses over the last three fences.”

Now the scene is set for a battle royal between Rachael Blackmore and Paul Townend to see who will be the leading jockey at the end of the National Hunt season.

“Rachael is on a crest of a wave at the moment. The two of them are neck and neck. That is going to be an exciting finish to the season too,” the trainer said.

“With the Covid pandemic, it would have been a difficult week for everyone in Cheltenham, Willie acknowledged the efforts Ian Renton, the CEO of Cheltenham Racecourse and his staff took to make sure the Irish were made to feel as comfortable as possible during their stay.

“They went out of their way to look after the Irish to make sure we could stay in a bubble. The stable staff stayed in the Annie Power building and they opened up the Best Mate area. They were looked after very well and were very happy. They were kept within the bubble. “Trainers and jockeys were in a hotel just near the racetrack. That worked very well too. They looked after us hugely. We were driven up and down to the racecourse every day. We kept in our bubble and with the five day isolation and a Covid test we could come back.”

“It is all go. It is our team of the year when the big meetings come. Fairyhouse, Aintree, Punchestown and we can, if we want to, go on to the big meeting in Paris. That is our usual at this time of year,” acknowledged Willie.