MAKING history is something that every player dreams of. On Sunday, we had the chance to do just that. Going into our game against the University of North Texas, we had a losing streak against them of 5-0 over the past couple of seasons. But on Sunday that all changed as we got our first-ever win in program history against the three-time defending Conference USA champions, North Texas. 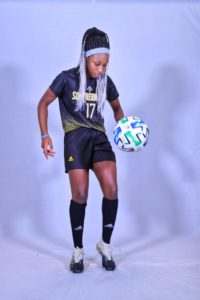 It is safe to say that it was not easy. It was a battle right from the beginning. A common theme with teams from Texas is their physicality. Our coach reminded us that it is important to not make the game “a running game” as that is their strong suit. We needed to make it a “thinking game” so we could tactically and technically win the game.

We started the game strong, a good habit that we have developed over the past couple of games. They are a team that is not used to being under pressure, so this worked to our advantage. After 26 minutes, we received a corner after some clever side-to-side play from myself and senior, Ariel Diaz. The corner floated over everyone in the box and met senior, Caitlin Pierce, as she hit it into the far post – almost a direct replica of the goal she scored at our last home game. We were now up 1-0. Eight minutes later, we had created another great chance where senior, Alice Campos, took a shot from the edge of the box which was just out of the keeper’s reach. This put us ahead 2-0 at halftime.

Just as we expected, North Texas came out strong and piled on the pressure. They tried everything to get back into the game and in the 61st minute, they were rewarded with a goal. They kept pushing but we effectively kept the ball out of our net for the rest of the game. To give them credit, they were very unlucky throughout the game. They scored two disallowed goals and did not receive a call for a handball in the box in the dying moments of the game. Any other day, the result could have been different. But today was clearly our day. Soccer is about who shows up on the day. We knew we had nothing to lose, and we gave it our all.

Thanks to this result, we have booked our ticket into the Conference Tournament from 13-17 April. We also are now placed first in our conference. A huge achievement for our team. Spirits are especially high since we are getting there in style after beating the team that is ranked 28th in the country, previous to this game.

We have a saying down here at the University of Southern Mississippi, it goes “Southern Miss To The Top” (SMTTT). We chant it after every session and before/after every single game. It essentially means that no matter what, every person at Southern Miss is determined to achieve the best and persevere through anything. ‘To The Top’ is not defined as anything because it isn’t supposed to limit you. What a Southern Miss student can achieve is limitless. As we did our usual chant after our history-making win on Sunday, I looked around and realised that we had proved just that.