Forget 2022 World Cup and look to the future

THE first thing that we as Irish supporters need to do is accept that we unfortunately won’t be qualifying for the 2022 World Cup in Qatar. Once we come to terms with that uncomfortable fact then the pressure can ease slightly on Stephen Kenny and allowed him to build towards a brighter future.

We have to accept our standing in world football at the moment. The difference between the quality available to the respective managers of Ireland and Serbia is the same chasm between their respective playing careers. Dragan Stojkovic was a magnificent player and it would be a major failing for him not to get a team that can afford to leave Luca Jovic and Sergei Milenkovic-Savic on the bench to at least second place in this group.

How Kenny must wish he players like that available to him. Last night, Ireland were well organised, well drilled, played some progressive football from defence and into midfield but were ultimately undone at both ends of the pitch. 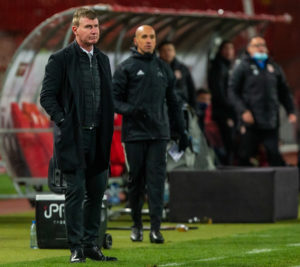 Mark Travers learned a harsh lesson of life at this level when he was superbly chipped by Aleksander Mitrovic for Serbia’s second goal. Travers made the decision to leave his goalmouth area to try reach a through ball and by the time he realised he had no chance of making it, Mitrovic was already delightfully chipping the ball over his head. It was an error of judgement bourne of not playing regular football and that is the big problem for a lot of Ireland’s young talented players.

Just in the goalkeeper position alone, we have Travers, Caoimhin Kelleher and Gavin Bazunu. All gifted young men who have impressed on their limited senior outings so far but until they establish themselves at club level they won’t be ready to be Ireland’s number one. Kelleher and Bazunu are particularly highly rated but is it likely that Jurgen Klopp or Pep Guardiola see them as a long term option for Liverpool or Man City? The current number ones at both clubs, Alisson and Ederson, were bought for huge sums and when they time comes to replace them it’s likely that the chequebook will be out, rather than turning to club’s under 23 team. It’s the next move in their careers that will ultimately decide whether Kelleher or Bazunu become a long term option for Ireland.

It is a similar story at the top end of the pitch. Such was the dearth of options available to Kenny that he started a clearly unfit Aaron Connolly. The Brighton striker buzzed around and carried something of a nuisance value, and Kenny clearly felt he should have been awarded a second half penalty, but the fact that he went down with cramp after 65 minutes proved just how short of match fitness he was. Callum Robinson was lively at times and did well to create Ireland’s goal but probably lacks the physique to play through the middle at this level and could be better suited in the wider areas. Again, unfortunately for impatient fans and the current manager, it’s a matter of waiting and hoping that the young players can develop. Adam Idah would probably have started last night’s game had he been fit but he has struggled for starts this season for Championship table toppers Norwich and that is likely to be the case again next season if they are promoted to the Premier League, but he recently signed a new contract and is clearly well liked at Carrow Road.

Troy Parrott is of course the big hope but he has found out about harsh realities of life at senior level on loan to Millwall and Ipswich this year and only recently scored his first goal of the season. But the hope is that even the difficult moments out on loan are learning experiences and that it will be benefit him in the future. There is no way of hurrying along this process, or a guarantee that young players will turn into dependable senior campaigners, but Ireland will just have to bide their time.

Which brings us to the manager. There is no way of dressing up Stephen Kenny’s first nine games without winning as anything other than disappointing but the pressure building after every game doesn’t do anybody any favours.

Kenny made bold decisions in his line last night and for better or worse was willing to stamp his authority on the team and make it his own. It would have been easy to go for the experience of Shane Duffy, Jeff Hendrick, James McClean, Robbie Brady and Shane Long but Kenny elected to place his faith in youth and was rewarded to some extent. Dara O’Shea perhaps could have done better for the first and third Serbian goals but overall had a good game and Anderlecht midfielder Josh Cullen showed the benefit of regular first team football at a high level. 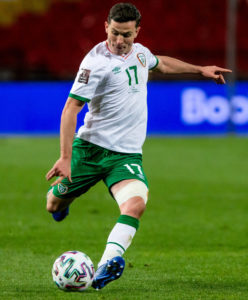 Josh Cullen was one of the success on the nights for Ireland
Photo: @INPHO/Nikola Krstic

The big positive on the night was ending the scoring drought and it was good to see Alan Browne score such a well worked goal and also a striker, in James Collins, getting on the scoresheet late in the game. Among the negatives was the performance of Matt Doherty. While patience is required with some of the young players, Kenny is entitled to expect more of a player who was transferred for a big sum last year, played in the Europa League this season and is playing for a club in the top six of the Premier League under a manager like Jose Mourinho. He had a pass completion rate of just 61%, by a distance the lowest of Ireland’s outfielders, and just had very little impact in a system that should have been playing to his strengths. 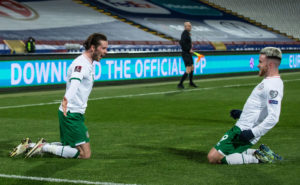 Despite all the talk of positives, Kenny will know more than anybody that this is a results business and managers can’t always talk about the future. Next up is Luxembourg in Dublin on Saturday and it has the feel of a must win game for Kenny’s long term future, but anybody expecting an easy game is sorely mistaken. They conceded just five goals in six games in their recent UEFA Nations League group and if they arrive in Dublin with a well organised defence, do Ireland possess a player who can open them up?

The question is if Kenny isn’t the man to lead Ireland then who is? And if somebody else was in charge would they get any more from the players available? There are elements of the Irish support will never fully back Kenny but it would be better if the pressure on the manager was eased and he was allowed to get to the end of this qualification series and reassess things then. There are certainly positive signs in what Kenny is trying to do but we need to accept that qualifying for the upcoming World Cup is an unrealistic dream given the options at hand.