PROBABLY one of the enduring sights of the Cheltenham Festival, which was caught live on television, was of one Mick Molloy running back towards the finishing line to greet The Shunter after he had just won the Grade Three Paddy Power Handicap Chase on Thursday.

A winner at Cheltenham is always special but the eight-year old had previously landed the Morebattle Hurdle at Kelso earlier in the month and the gelding, by winning here, secured a £100,000 bonus. The win was a plan set out at the start of the season coming to fruition in spectacular style.

Winning grooms tend to conceal their emotions in front of the TV cameras but Mick was clearly in jubilant and ebullient mood. From Arklow, he drives for George Mullins, who transports most of Willie’s horses to meetings both home and abroad. He also rides out for Emmet Mullins.

The Shunter is trained by Emmet, who is a son of George and a nephew of Willie. He is not that long training and has his stables in Closutton just across the road from his more famous uncle.

By 8am on Friday morning Mick was back home in Arklow having left Cheltenham at 9.30pm the previous day. He had been accompanied by The Shunter and Sneaky Getaway, who also ran at the festival. 50 years of age, last week’s Festival is a week that Molloy will remember to his dying day.

“I was fifteen when I first visited Cheltenham. I wouldn’t say I went every year. When I got married and the chaps were younger I didn’t go every year,” he explained.

Back then as an apprentice jockey at The Curragh he was part of the Irish stable staff which were scheduled to run against the UK stable staff in the cross-country race. There was disappointment for him when snow on Gold Cup morning caused the race to be cancelled.

Molloy’s biggest success as a jockey came when he guided Fraber Glen to victory in the Paddy Power Cup chase at the 1992 Christmas meeting in Leopardstown. After that his successes were few and far between. Yet he is still in the game and making a decent living out of it.

It was the first time he had ever been associated directly with a winning horse at the Cheltenham Festival.

“My phone hasn’t stopped for the last 12 hours. Brilliant. Over the years I have driven over a lot of winners for Henry de Bromhead and Willie Mullins just being the driver. I had never groomed one myself. That is the first Cheltenham winner I have ever groomed,” he said passionately.

The winner started 9/4 favourite. Ridden by the 7lbs claiming, Jordan Gainford, The Shunter was always going well. After the last when asked the question the winner pulled away to win by three lengths from 5/1 second favourite, Farclas, ridden by the experienced Jack Kennedy and trained by Denise Foster.

At the short enough starting price that he was Molloy was surprised The Shunter was fancied so much. Yet the punters were proven right.

“Once he came down the hill I knew by the movements of the jockey he had plenty left in him. We were very surprised with the performance. We were surprised he had travelled so well. He had a very hard race in Kelso and after travelling home from Scotland he was tired after it. Emmet has done a great job, freshening him up and gave him very little work. He got the horse back fresh again,” he said.

“The price was because of the publicity and because he was going for the bonus. Realistically he should have been five or six to one for that race. There was a pile of money behind him because the public got involved.” 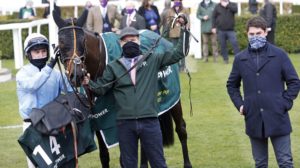 On television Molloy suggested that the owner would be obliged to give the groom 3% of the bonus he will receive for securing the Kelso/Cheltenham double.

On Friday he laughed that off.

“We were dropping a hint. 100% of that bonus is for the owner. The jockey and the trainer are not entitled to any of that. The owner, Paul Byrne from Dublin, is a very generous man and we will all get a nice present out of it,” predicted the winning groom.

“Emmet is a young trainer on the up. He is only going to get busier. I have worked for Emmet and George but I can see over the next year that Emmet is building up his reputation. People have more confidence in him and they will give him horses. That means I could end up working for Emmet full-time,” says Mick.

Racing has successfully met the challenge head on of the behind doors aspect of the game because of the Covid crisis. Molloy says the staff of Cheltenham Racecourse embraced the Irish contingent and did all they could to make their stay as comfortable as they possible could.

“It was different. We were living in an Irish bubble in an Irish village. The atmosphere was electric. Even before The Shunter won it was brilliant. Everyone behaved themselves. There was no drinking, no alcohol and Cheltenham looked after us as if we were kings and queens. They made a bit effort to look after us. It was absolutely fantastic. Unbelievable the way they looked after us.”

For the winning jockey it was only his second ride in England.

Mick has his own way of explaining the riding arrangement in Cheltenham for The Shunter.

“Alain Cawley rode him in Kelso but got a suspension because, how will I put it to you, he was too strong with his whip.

“He probably wouldn’t have rode him in Cheltenham anyway because the owner would have wanted to put Jordan Gainford up on him because of the 7lb allowance. The trainer and the owner are very intelligent men. They were giving the horse every chance to win by taking the 7lb off him.”

For Mick the last year has given him many highs. He accompanied the Tony Mullins trained Princess Zoe in Paris last October when she won the Qatar Prix du Cadran at Paris Longchamp.

“We went on the ferry and the train. We had a brilliant weekend in Paris.”

Mick says he sees at close hand why the Mullins family have been so successful over the years. He says there is no magic formula.

“I tell you what they are. They are very hard working. When Paddy Mullins passed away he didn’t leave them as millionaires. They had to work very hard to get to where they are. Paddy was very successful and there wasn’t the same money in the game that there is now. They have worked so hard for everything they have got. They deserve all the success they have,” he stresses.

Meanwhile it was a first Festival victory for both trainer Emmet Mullins and the jockey Jordan Gainford and, as the 15th Irish-trained success of the week, secured the Pertemps Prestbury Cup for Ireland.

At the post-race press conference the winning trainer praised the ability of the horse.

“He was very good today. He’s tough and durable; there doesn’t seem to be anything fazing him.”

The owner and trainer had taken a chance by entering him in five different races before deciding which one to go for.

“It’s great from Kelso to give this bonus. Win, lose or draw, we always thought it was the right move to go to Kelso for the Morebattle Hurdle. It is a huge pot in its own right, and to go there and take on 13 others rather than go for the County Hurdle off the same mark and take on 24 was first and foremost. We got that one right, and it has just fallen into place since,” he explained.

The trainer also pointed to the contribution of the winning jockey.

“Jordan is catching everyone in Ireland’s eye at the moment. He’s very talented and the owner, Paul, was fairly insistent on claiming 7lb, and at that Jordan was the only option. He’s very good and he showed that here today.”

It was a day the winning jockey will never forget.

“It’s unbelievable really. It’s something you can’t describe. It’s a feeling I’ve never had before. It is hard to describe that feeling when you cross the line, it is just something else to be honest.

“Today he (Emmet Mullins) told me to jump off good and smart. I rode him out this morning and he was in great form and he was very on his toes but he is a busy sort of horse. Stepping up in trip to two half should suit him and he said try and get him relaxed fourth or fifth but away from the stands he took me away a little bit so I let him enjoy himself.

“I gave him a squeeze at one or two as he tends to do his own little thing. Down to the last I just made sure I went tight and popped it. He battled hard from the last and I can’t believe it. I’ve talked to great people during the week.

“I spoke to Davy Russell the other night and he filled me full of confidence and said go out and ride like have been for the last three or four years and pretend it is point-to-pointing.”