Dwyer ready for kick off after ‘best ever pre-season’

AS Wexford Youths women prepare to kick off a new National League season against champions, Peamount United on Saturday at 4pm, defender and Carlow native, Lauren Dwyer says that a tough and enjoyable pre-season has them ready to compete for silverware once again. 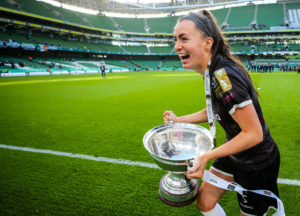 Lauren Dwyer has enjoyed tremendous success with Wexford Youths but after finishing last season empty handed she is more determined than ever to lift more silverware this season
Photo: ©INPHO/Oisin Keniry

“We have a few new faces in so it’s a fresh start for everyone because last season was disappointing. We brought in some different management, a few new players and I think everyone was so disappointed with last season that they are raring to go, we’re all guns blazing. Training has been so competitive, the tackles have been flying in, our 11 vs 11 games have been so competitive, the competition to even get into the matchday 18 is incredible.”

It’s a tough start for the southerners with champions Peamount first up at Ferrycarrig Park. Dwyer says they have never come up against their rivals this early on but that it will be a good test to see where they are both at.

“It’ll show us both where we’re at and how well the pre season has gone. But look, everyone writes us off anyway. All the conversations that have been had between people are about how it’s between Peamount and Shels so we’re going in there as the underdogs but I think it’ll be a good game and hopefully we can come out on the right side of the draw.”

Despite being the most successful women’s club in the country, Lauren said that Wexford are always seen as the underdogs.

“Even though we had a bad season last season, it was the first season in I don’t know how long that we had a bad season. If you look at two or three seasons ago, we won the League and the League Cup I think it was and we went into the FAI Cup as underdogs, everyone saying Peamount would win it. I don’t know why people always write us off or if they just think we’re lucky to be where we are but I think our stats  prove them all wrong. We have the most successful Women’s National League Club that there is so hopefully this year we can get some silverware and be as successful as ever. I think though even if we prove people wrong, the next cup final there is we’ll still be underdogs in a way.”

The Carlow woman has had her battles with injury over the last few seasons and unfortunately she is carrying a little knock into the new campaign.

“I had a really strong pre-season until say two or three weeks ago. I was in training and went to kick the ball and then we were doing a bit of running after it and I pulled my hip flexor going into my quad so I’ve been out for a week and a half, nearly two weeks which isn’t great when you have the first game of the season coming up this weekend. I’m back doing some running as of last Thursday so hopefully I’m allowed to start taking part in a full session Tuesday and Thursday. I’ve probably had one of the best pre-seasons I’ve had in a long time so I am kind of disappointed. It’s part and parcel of playing sport though, no matter what sport you play. Just this season I started so well, it’s so disappointing but I’ll be 100% come the weekend.”

As well as dealing with injuries, Lauren also tested positive for Covid and the impact of that ruled her out of the final fixtures of last season.

“It wasn’t great now, I ended up testing positive the Wednesday after the game against Shels on the Saturday and it literally knocked me. Mine wasn’t severe thankfully but I have asthma so my breathing was just so difficult. I went for a run afterwards and I was trying to catch my breath. It took a couple of months to even get my breathing right after it but I think nearly everybody has had it. My family all had it at the same time so I wasn’t by myself. Thankfully I’m over it now.”

She feels determined this season to do well.

“I think last season I was in between playing Gaelic and playing soccer and I ended up ill towards the end of the season so I didn’t finish the season at all. But this season I feel good in myself, I’m focusing on soccer, training has been going well so I’m happy where I’m at. I’m just trying to stay competitive because you want to be in the starting 11 and be competitive in games and I want to get more consistency in my game as well.”

After missing out on silverware last season, Dwyer knows that there will be pressure on Wexford to win trophies this season but that the pressure comes from themselves.

“I think the pressure is moreso coming from ourselves, we know ourselves we can perform much better than we did last year. We weren’t happy with the outcome of last season and we have a lot to prove to ourselves and we know we can win silverware. Nobody’s eyes are going to be on us though, they’ll be on The Peas and The Shels so I think once we focus on ourselves, we can win a league, we can win a league or a cup. I think everyone used to say it when we reached cup finals that we’re nearly better as underdogs and we perform better. Of course that takes the pressure off in a way but we don’t feel that pressure because as a group, we all know each other inside out. I know the person to left of me or to the right of me will give it 100% and they know I will too. The pressure we put ourselves under is definitely from ourselves and nobody else.”