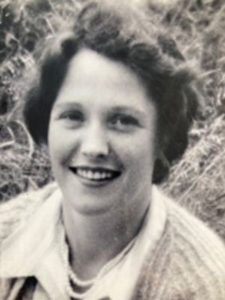 IMELDA Hutton, Ashgrove, Tullow Road, Carlow passed away peacefully on Tuesday 8 February in the wonderful care of the staff of the town’s Hillview Nursing Home. Imelda, who had been in failing health over the last five years of her life, having suffered from a form of Parkinson’s Disease, had been nursed at home by her devoted husband Paddy until it became essential that she receive residential care.

The former Imelda Doyle was a native of Kearney’s Lane, Pollerton Big, Carlow, being the eldest in a family of eight children – six girls and two boys. She was predeceased by her brother John, who was killed in a catastrophic fire accident at the garage he owned in London in December 1991.

Born on 9 July 1941, Imelda was educated by the Presentation Sisters in Carlow. Following her schools days, she gained employment as a cook in St Dympna’s Hospital. Subsequently, Imelda worked for a number of years as a cook for An Foras Talúntais (the agricultural institute) in Carlow.

She was a wonderful cook, her speciality being her home-made brown bread on her own Welstood cooker.

She met and married Paddy Hutton from St Mary’s Park – they wed on 5 March 1962 in the Cathedral of the Assumption. Imelda’s death occurred just a month short of their diamond (60th) wedding anniversary. They were a deeply united couple, whose primary focus was always on the welfare of their children, grandchildren and extended family.

Paddy Hutton is well known in the Carlow area, having been employed in Dempsey’s Hardware, Tullow Street for 45 years, having previously worked for some four years in the Esso oil company depot off Green Lane.

The Huttons initially lived in the house of a friend before moving to their own home in Oakley Park, Tullow Road, where they resided for some 15 years. The family then moved to Ashgrove, where they have lived happily for the past 35 years, having reared a family of two daughters and a son.

Imelda’s love of family was aptly demonstrated when she twice brought her grandchildren to Disneyland in Paris for a treat some years ago.

In her younger days, Imelda was a talented Irish dancer, winning a number of cups and medals for set-dancing. She was part of the Carlow Dancing Set of 12 ladies who won competitions in various Irish locations and also enjoyed overseas success in England.

Closer to home, Imelda and Paddy liked to dance in the Ritz Ballroom, where she greatly enjoyed the waltzes and quick-steps.

Imelda was also a keen gardener and kept the Hutton garden at Ashgrove in tip-top condition, front and back.

Paddy Hutton always had an interest in vintage motorbikes. He was proud owner of a British manufactured Matchless 500, which he fitted with a sidecar. So he and Imelda would take off on camping holidays to the west of Ireland, camping out in good summer weather or availing of bed and breakfast if the rain came down. They greatly enjoyed those days of motorcycling around the western seaboard.

Imelda was waked in Healy’s Funeral Home, Pollerton Castle on Wednesday 10 February, with prayers being led that evening by Fr Tom Little, PP, Askea-Bennekerry-Tinryland. Her remains were removed to the Church of the Holy Family, Askea on Thursday morning, where Fr Tommy Dillon, CC, celebrated her funeral Mass.

Readings at Mass were by Imelda’s daughter Catherine and grandson Thomas. Catherine also paid a fitting tribute to her mother in a brief eulogy, while the Prayers of the Faithful were recited by grandchildren Conor, Graeme and Ian.

The lovely singing of hymns at Mass was by Julie Woods (niece).

Following Mass, Imelda was laid to rest in the Hutton plot at St Mary’s Cemetery, with Fr Tommy reciting the final prayers at the graveside.