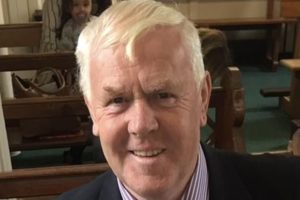 John was born on 28 October 1954 and was the youngest in his family, predeceased by his sister Margaret (1983) and parents Patrick and Ellen (née Kelly). He attended Myshall National School and then went to the De La Salle Brothers’ school in Bagenalstown. John left school at the age of 15 to work on the family farm in Ballinrush after the death of his father. He loved working on the farm and the outdoors, particularly tractor work and the challenge of mending and welding items on the farm.

John met his future wife Ann Lennon from Ballytiglea, Borris at a dance and they married in 1979, residing in Ballinrush. They had four children: Patrick, Seán, David and Mairéad.

John was a dedicated family man with a great love of the GAA. Where possible, every Sunday was spent going to GAA matches or pucking a ball around the garden.

John enjoyed family trips to the beach and holidays in Ireland during the summer.

In recent years, his family was very much extended with the addition of eight grandchildren, whom he adored. He greatly enjoyed family events such as christenings and birthday parties.

At home in Ballinrush, visitors were always welcomed and many evenings and late nights were had drinking tea and having chats with great neighbours and friends.

News of John’s death was learned of with a deep sense of shock and regret throughout the community in his native Myshall, where he was a deservedly popular figure – a man with a lifetime’s devotion to the Gaelic Athletic Association. John was a talented hurler in his younger days with Myshall, winning many underage titles playing at full-forward.

He was a long-serving and dedicated member of Miseal Juvenile Club, being treasurer and then chairperson for many years. He was involved with numerous underage teams and took part in a trip to Féile na Gael in Tipperary.

John enjoyed public speaking and never turned down the opportunity to make a speech or act as MC at awards evenings. He loved to go to matches in Netwatch Cullen Park and particularly enjoyed travelling to Croke Park to watch Myshall camogie and Carlow county teams in recent years.

Throughout his life, John was involved in many areas in the community ‒ Macra na Feirme, Scór, the GAA and the local historical society. He was a member of the committee that organised the National Sheep Shearing Competition in 1978, along with his sister Margaret.

John dressed up on many occasions to take part in events in the community such as the 1998 centenary, plays in the Myshall Community Centre and the local St Patrick’s Day parade. He played the parts of pikemen, priests and St Patrick, to name but a few of his stage parts. John often volunteered at local events such as the Blackstairs Vintage Rally and sports days over the years. Community was a major part of his life.

Unfortunately, John became ill in late 2019 and spent time in St Luke’s Hospital, Kilkenny and St James’s Hospital, Dublin. Ann cared for John at home for his last few months, along with the help of his carers Liz, Mary, Eileen, Kathleen, Jenny and Dora.

John’s family would like to extend their deepest gratitude to the carers, without whom it wouldn’t have been possible for John to stay home in the final stages of his illness. The O’Connor family would like to extend their gratitude to Lisa, John’s palliative care nurse, all the staff at Tullow Day Care Centre and Dr Coffey and all at Bagenalstown Medical Centre, Bachelor’s Walk for the care and attention John received.

The family would also like to thank everyone for their support at this difficult time ‒ his neighbours, friends and the wider community.

John reposed at home and his funeral Mass was celebrated by Fr Pat Hughes, PP, Myshall-Drumphea on Saturday 30 January in the local Church of the Holy Cross, after which, burial took place in Lismaconly Cemetery, with Fr Pat reciting final prayers at the graveyard.

Due to Covid-19 restrictions, attendance at Mass was restricted to ten people.

In the eulogy at the funeral Mass, John’s son Seán mentioned the many days John spent in Chris Ryder’s (deceased) shed, where GAA matches were scrutinised and discussed at great length.

Symbols of John’s life displayed at the funeral Mass were a Myshall jersey; a sod of land from the family farm at Ballinrush; a family photograph; a miniature Massey Ferguson tractor; and a set of headphones.