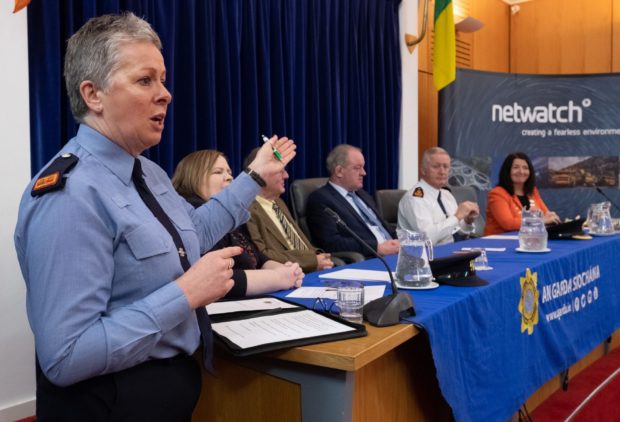 Garda Inspector Audrey Dormer, who will be retiring from the force next month. Insp Dormer is pictured speaking at the launch of the Kilkenny-Carlow Garda Youth Awards in March 2020 prior to the first lockdown
Photo: michaelorourkephotography.ie

CARLOW Garda Inspector Audrey Dormer was lauded for her leadership in the community as news emerged that she will retire shortly. Leading the tributes at last week’s meeting of the Carlow Joint Policing Committee (JPC), District Chief Superintendent Padraig Dunne said she would be a great loss to policing in Carlow.

Insp Dormer is set to retire in May and this JPC meeting was her last.

Insp Dormer, who is from Sleaty, has served in Carlow for the last five years and previously served in Thomastown for two years after she was promoted to the rank of inspector. Prior to that, Insp Dormer had served much of her career at garda headquarters.

Chief Supt Dunne said: “On behalf of Waterford, Kilkenny and Carlow division, I would like to acknowledge the work Audrey has done over the years. I have known her for a good long time. We worked together on big investigations. She is a person of honesty and integrity. She has a great personal interest in how Carlow is policed.”

Chief Supt Dunne said the retirement was much to his disappointment and he wished that Insp Dormer could stay on a bit longer.

The meeting heard how Insp Dormer’s roots and knowledge of Carlow had been invaluable in her role.

Describing Insp Dormer as a “fearsome advocate for Carlow”, Supt Aidan Brennan said “she has been a fantastic support to me, particularly in her local knowledge of the town. It’s a wonderful thing to help and support in a community role in your own homeplace. It’s fantastic how well she knows everyone, how well she knows the town”.

Supt Brennan said that Insp Dormer had nipped problems in the bud locally before they escalated.

Public representatives then lined up to wish Insp Dormer well, including her long-standing friend deputy Jennifer Murnane O’Connor, who said: “She is a sad loss to the town and people of Carlow; she has been an absolute ambassador for the gardaí in Carlow.”

The Fianna Fáil TD added: “I still think you are too young to be retiring!”

Carlow County Council chief executive Kathleen Holohan said Insp Dormer had been of great assistance to the council across an array of issues. She was part of the county’s response to Covid-19, representing the gardaí at co-ordinated meetings with the HSE. Insp Dormer was also a leading garda representative in the Carlow Town Development Forum and the ambitious ***Project Carlow 2040*** plan.

Ms Holohan said: “She has always been a pleasure to deal with, very down-to-earth and practical. She is a great loss to all us here in the county.”

JPC chairperson Michael Doran said Insp Dormer had always been very helpful to himself and courteous to members.

“You have served Carlow well,” he said.

Cllr Fergal Browne lauded not only her contribution to Carlow in her role as a garda but also as a volunteer with Carlow Rowing Club. “No doubt, you have given great leadership to young people over the years that may have prevented them going on a wayward journey,” he said.

Cllr John Pender described Insp Dormer as a “local girl”, although he didn’t wish to speculate on whether she’d describe herself as being from Laois or Carlow. “She has had a wonderful career in An Garda Síochána. It was lovely to see her progressing so far in the ranks. She has always been extremely approachable and friendly. She will be missed by us all.”

Cllr Andrea Dalton said Insp Dormer epitomises all the qualities you’d wish to find in a garda. “She has been fair, approachable, proactive, good craic! I know her loss will be the rowing club’s gain and she will be on the river, going forward. She is full of community spirit and her heart is in the right place.”

Cllr John McDonald said Insp Dormer had been a source of advice and help for him, while Bagenalstown councillor Arthur McDonald offered some well-chosen final words: “She shows what An Garda Síochána is all about – community-led, people led. That’s an epitaph that will go with her wherever she goes.”