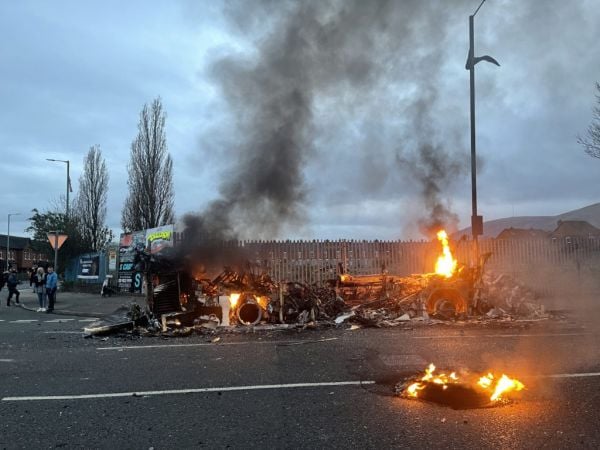 An act of solidarity has taken place at Belfast City Hall for a bus driver whose vehicle was hijacked and set alight amid scenes of disorder.

A number of drivers gathered in the grounds of City Hall on Thursday lunchtime.

Irish Congress of Trade Unions (ICTU) assistant general secretary Owen Reidy said it was a demonstration on behalf of the entire trade union movement to support the driver, who has been left shaken by the incident.

“Theirs is an act of generosity towards their fellow bus driver who was shockingly attacked last evening and towards the brave police officers and journalists who were also assaulted while doing their job and serving the community,” he said.

“Workers across Northern Ireland will not accept being the subject of attacks when going about their duties.

“The Translink workers are standing up and proclaiming this loudly.

“All public representatives from across the community and every person of good will and influence in interface areas have to make clear that all such protests end before we have another night of violence.

“Young people are being treated as cannon fodder.

“Someone is going to get killed.

“The best public service any decent person of influence can do right now is to prevent the spiral deepening.

“Politicians need to come together, work together and make politics work in the interest of the entire community.”

The Metro Bus was taken at around 7.20pm at Lanark Way in west Belfast on Wednesday.

Translink chief executive Chris Conway said all the passengers were off the bus before the attack and said his thoughts are with the driver who he described as “badly shaken but unhurt”.

Bus services were withdrawn in a number of areas of Belfast as a precaution.