PATRICK Mullins hopes he can turn a lifelong dream into reality by becoming the first amateur rider in 31 years to win the Randox Grand National at Aintree aboard second favourite Burrows Saint, who he believes “ticks all the right boxes”. 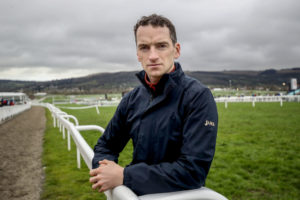 The Grade One-winning jockey picked up the plum spare ride aboard the eight year old, who is trained by his father Willie Mullins, when regular rider Paul Townend failed to recover from a foot injury sustained in a fall at Fairyhouse on Sunday.

It will be the fourth time the 31 year old has ridden in the world’s greatest steeplechase since making his debut in it in 2011, and he believes the Susannah Ricci-owned gelding represents his best chance of winning.

Burrows Saint, who landed the Irish National in 2019, warmed up for his first start over the famous fences when chasing home stablemate Acapella Bourgeois in the Grade Three Bobbyjo Chase at Fairyhouse in February.

He said: “It is fantastic to pick up the spin on him and obviously Paul hasn’t recovered from his fall in Fairyhouse. The weight (10st 13lb) is quite light for me but it is just enough. He is in great form at home. The lad that rides him out is very happy with him.

“I got a sit on him over at Haydock this morning and he ticks a lot of the boxes. He is the right age at eight years old. He has the right kind of weight and is progressing as he has only had nine runs over fences. I’m really excited to be sitting on him.

“It was in the back of my head (that I might get the ride). I saw the weight was doable. I was watching it from then. I was never expecting to ride a horse with a live chance in the Grand National. It doesn’t get any better than this. I did 11st 1lbs on a filly 10 days ago as I’m quite in the championship (amateur jockeys) with Jamie (Codd) so I was watching my weight anyway.

“I usually have one with lots of weight that is an outsider. Ever since I was seven or eight and I read a book on the history of the Grand National, I wanted to win it. Some people like the Gold Cup, but for me this is the race I’ve always wanted to have a crack at so it doesn’t get any better.

“I was second on a horse called Boxer Georg in the Foxhunters a few years ago. Willy Twiston-Davies beat me on Baby Run. That’s the closest I’ve come (to winning over the fences). My dad won the Foxhunters on Atha Cliath and to win one over the National fences would be a dream before I hang up my boots.”

Although the coronavirus pandemic forced last year’s race to be cancelled, Mullins believes that may have been no bad thing for Burrows Saint.

He added: “On the stats, missing the race as a seven year old last year is probably a good thing as no seven year old has won the race since 1940 so that might have been a blessing in disguise. He is a year older and he is still relatively unexposed. I think he ticks a lot of boxes.

“I think everything has gone pretty much to plan. He had a nice couple of runs over hurdles and a nice run in the Bobbyjo. I know he didn’t win but he wears a tongue strap and heavy ground wouldn’t have suited him well. When he won the Irish National it was this sort of ground so that will bring out improvement.”

The Cheltenham Festival-winning rider added: “I rode Acapella Bourgeois out this morning as well and he seems in great form. Danny gets on very well with him.

“Obviously he beat Burrows Saint in the Bobbyjo so where one is the other shouldn’t be far away. I suppose Burrows Saint will improve more for the better ground as Acapella  Bourgeois seems to like that heavy ground so that might swap the placings there. He is a horse that is a little bit older as he is 11. He is probably a little bit more exposed but he is in great form and he has a nice racing weight as well.

“Class Conti has to have a little squeak of getting placed. I suppose the worry with him is will he be able to lie up with the early pace. He is a safe jumper. He will like the ground. My mother Jackie rides him out at home so she will take a lot of the credit if he wins. Brian Hayes gets the spin on him. I could see him running into a place quite easily.

“Sean O’Keeffe rode a winner for us at Cheltenham and he gets a spin on Cabaret Queen. She has won the Kerry National at Listowel and she has won a couple of good handicap chases. Her form has tapered off a little bit but I think this drier ground will suit her well. I think there are worse long shots than her.”