THERE will be plenty of Carlow interest at the Aintree Festival over the coming days, with Patrick Mullins confirmed this morning to ride in the most famous jumps race of them all, Saturday’s Grand National.

The ban on grassroots sports, which prevented amateurs like Mullins riding at the Cheltenham Festival, has been lifted and that, and an injury to Willie Mullins’ number one jockey Paul Townend, have combined to give Patrick Mullins a very live chance in the National.

Burrows Saint won the Irish Grand National in 2019 and he is currently high among the favourites to win the famous race. It will be the fourth time that Patrick has rode in the race, he completed the race for the first time in 2019 on Don Poli. 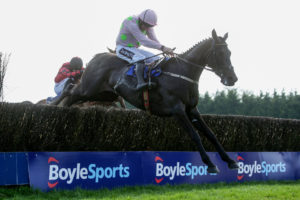 Burrows Saint, with Ruby Walsh on board, on the way to winning the 2019 Irish Grand National. Patrick Mullins will take the ride on the horst in the Aintree Grand National on Saturday
Photo: ©INPHO/Laszlo Geczo

Patrick’s mount is one of four to be saddled by his father Willie for the race. Danny Mullins will ride Acapella Bourgois, Carlow resident Brian Hayes will ride Class Conti and Sean O’Keefe rides Cabaret Queen.

Before that, Patrick also has a good chance of riding a winner on the first day of the Festival. Billaway, with Townend on board, was beaten on the line in the Hunter’s Chase at the Cheltenham Festival and will start the 4.05pm Foxhunter’s Chase on Thursday as favourite.

Patrick will also ride the favourite in the 4.05pm on Friday, Livelovelaugh.

One of the big stories of the Cheltenham Festival was the Emmet Mullins trained The Shunter. The horse picked up a nice £100,000 bonus for winning at Cheltenham and is currently in the process of being bought by JP McManus, that deal could even go through in time for him to race in the McManus colours in the first race today at 1.45pm.

Bagenalstown based trainer Mullins also has a live chance with Cape Gentleman in the 4.40pm on Friday. Rachael Blackmore will take that ride and the Carlow resident has a number of opportunities over the three days to build on the wonderful success she enjoyed at the Cheltenham Festival, including on Minella Times in the Grand National.

Shark Hanlon’s celebrations after winning his first Grade 1 last weekend at Fairyhouse have just about died down and he also has a runner on the first day, Rewritetherules in the 4.40pm. Dunvegan goes for Pat Fahy in 4.05pm on Friday so there are plenty of Carlow links to enjoy at one the UK’s biggest National Hunt festivals over the coming days.