CARLOW have been placed in a group with Kildare and Westmeath after the draw for the Joe McDonagh Cup was made this evening.

Tom Mullally, who also manages Kildare senior champions Naas, will have plenty of inside knowledge ahead of his first Championship game in charge of Carlow when they take on the reigning Christy Ring Cup champions in Newbridge on the last weekend in June.

Carlow then host familiar foes Westmeath the following weekend. The group will be completed with Kildare travelling to play Westmeath in Cusack Park on the weekend of 10/11 July. 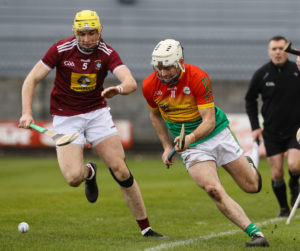 Marty Kavanagh in league action against Westmeath last year. The two counties will face in the Championship once more this summer
Photo: ©INPHO/Lorraine O’Sullivan

Kerry, Down and Meath are in the other group in the competition.

The top team in each group will play in the final and the winner promoted to the Leinster Hurling Championship for 2022.

The bottom team in each group shall play off and the loser shall be relegated to the Christy Ring Cup in 2022.

Carlow’s hurlers are due back on the training for the first time this year this week.