Wednesday, April 21, 2021
AHEAD of the Punchestown Festival, which starts next Tuesday, champion trainer Willie Mullins has been talking to journalist Daragh Ó Conchúir about the strong squad that he will bring to the final meeting of the National Hunt season. Mullins intends on running a number of his Cheltenham Festival winners and there will be a mouthwatering battle on the first day when Allaho goes head to head against Chacun Pour Soi in the Grade 1 William Hill Champion Chase.

“The William Hill Champion Chase could be a good race,” he mused. “At the moment I’m looking at the race for Allaho. I’d just like to see what he can do over two miles, he jumps so efficiently and so well, that is where my head is at at the moment. 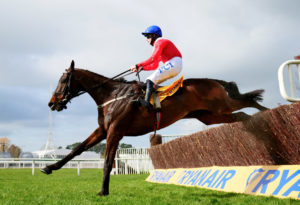 Allaho was a hugely impressive winner at the Cheltenham Festival
Photo: ©INPHO/Mark Cranham

“I love horses that jump as quick as him and if you can jump that quick usually you can come back in trip a bit. I think Allaho has the jumping technique to jump with two milers and he gallops well enough, we all saw that in Cheltenham. It’s worth a craic I think, we’ve got to ask the question in Punchestown and then we will know where we want to go next year.”

“I think this is the natural race for him. There will be plenty of pace on and Cilaos Emery will probably go there as well so we will be well represented in the race.”

The tone of strong representation for the champion trainer will be set in the opening Grade 1 event of the week, the eCOMM Merchant Solutions Champion Novice Hurdle in which Appreciate It leads the charge.

“Appreciate It has surprised me,” Mullins admitted. “I never dreamt he had that much speed but he jumps, he gallops as well. He probably takes a lot of speed out of horses with the cruising speed he has as well and will definitely go for the eCOMM Merchant Solutions Champion Novice Hurdle. 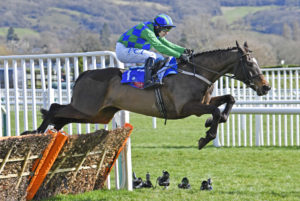 Appreciate It will look to follow up an excellent win at Cheltenham with another win at Punchestown
Photo: ©INPHO/Francesca Altoft

“Blue Lord is in there as well and he was going to run a fantastic race at Cheltenham before he fell at the last. I think he will improve for the flatter track and the nicer ground we will have at Punchestown. Echoes In Rain is interesting. She will probably go for the mares’ race but her performance in Fairyhouse was very good and she is in the eCOMM Merchant Solutions Champion Novice Hurdle on Tuesday getting a nice fillies allowance so we’ll see.”

Tuesday’s Grade 1 Dooley Insurance Group Champion Novice Chase has the potential to be a race for the ages with Envoi Allen and Monkfish likely to lock horns for the first time and once again the Mullins support cast is enviable.

“Colreevy has been covered by Walk In The Park and she will go for the Dooley Insurance Group Champion Novice Chase. That will probably be her last run. The Flynns are out and out breeders and she is a fantastic looking mare and hopefully she’ll be lucky.

“From winning the Arkle at Christmas over two miles I think I’m going to put Franco De Port in over three miles for and that will tell us where we are going next year. We’ll have a good hand in that race.”

Wednesday’s feature race is the Ladbrokes Gold Cup, a race in which Mullins saddled the first and second when it was last run in 2019 as Kemboy got the better of Al Boum Photo and Ruby Walsh retired on the spot.

Both horses are reported to be well ahead of a return to that stage where they’ll be joined by stable companions Melon and Easy Game and will face the Cheltenham Gold Cup winner Minella Indo and the Paul Nicholls-trained Clan Des Obeaux who is due to be supplemented for the race tomorrow.

“Lots of people could say that Al Boum Photo’s run might have been good enough to win the last two Gold Cup’s and he just met two good horses on the day. I’m not saying he’d have won the Gold Cup but I thought he could have run better, maybe he didn’t fire as well as he has. Certainly the last five jumps weren’t as strong as they were last year. He has worked well in the meantime and I’m happy with him where he is at the moment. 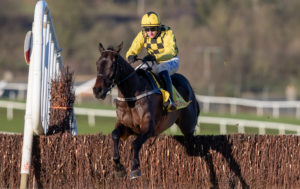 “I imagine Kilcruit will run, Sir Gerhard will run and we have a few more there. Ramillies is a horse whose homework is good. It might not be as good as the other two (Kilcruit and Sir Gerhard) but it is good and I still think there is a good horse lurking in there somewhere and it has to come out. Maybe a change of track and a flat track like Punchestown might bring it out in him. Grangee is there, she will probably go for the mares bumper.

“I think the track might suit Kilcruit better so we’ll see. It’ll be different and worth watching anyway.”

The Paddy Power Champion Hurdle will be the target for Sharjah who followed home Honeysuckle at Cheltenham last month.

“Sharjah ran a fantastic race in Cheltenham. I don’t think he could have improved much more. He’ll go for the Paddy Power Champion Hurdle. I’ve got James Du Berlais, Klassical Dream and Saldier in that race as well and we’ll see what way they go.

“James Du Berlais disappointed me at Cheltenham as his homework was way better than that. He holds entries in the two mile and the three mile hurdles so we’ll see when they do their final bits of work which direction they go.”

Energumene was a high profile absentee from the Cheltenham Festival but remains on course to return to action in the Ryanair Novice Chase.

“Energumene had a little mishap before Cheltenham and I thought that was him for the season but he recovered quickly. I was trying to get him ready for Fairyhouse and then I felt it wasn’t fair on the horse to go to Fairyhouse so I said I’d wait for Punchestown and he’s been fine since so I’m looking forward to getting him out.”

The 2021 Punchestown Festival will take place from Tuesday 27 April to Saturday 1 May. Full coverage will be available each day on RTÉ and Racing TV as well as interaction on all Punchestown social media platforms.

You can see the full interview between Willie and Daragh in the link below.