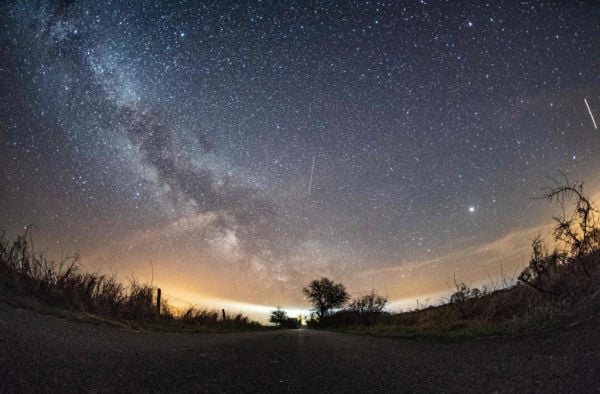 A Lyrid meteor shower will be visible over Ireland tonight, with up to 18 meteors per hour predicted.

The shower will be visible over the entire planet, and those willing to stay up that little bit later will have the best chance of spotting as many shooting stars as possible, according to Astronomy Ireland Magazine editor David Moore.

“Shooting stars can be seen at any time of the night, from dusk until dawn, but you will always see more shooting stars after midnight.

“As we go around the sun after midnight, we are on the side facing into the direction we are travelling in. It’s like driving in a rain shower – when you are driving into the rain, more rain drops will hit the front windscreen than will hit the back. It’s exactly the same here, so those who like staying up late will be rewarded,” David says.

The Peak of the Lyrid Meteor Shower.
See around 15 – 20 fast and bright meteors per hour appearing randomly in the sky.
See how to watch here: https://t.co/ZVH0BO3jHz

While people in the country are usually at an advantage for seeing meteor displays due to higher levels of light pollution in built-up areas, that should not be the case tonight David adds.

“This year, the moon in the sky is quite bright. It’s probably going to brighten up rural locations as much as the suburbs of towns and cities, so it’s almost an equal playing pitch for people to go out and watch.”

David adds there is no need for equipment either, recommending “if you have a telescope, do not use it” as it will focus on too small an area when you should be trying to view as much of the sky as possible.

Lyrid meteors face off against a bright moon this week https://t.co/r1zk7s6KJY pic.twitter.com/EkPAqHHx12

To get the best view and with the weather forecast for tonight looking clear, David suggests heading outside and laying back so the sky fills your entire vision.

Although a Lyrid meteor shower can produce two to three times as many shooting stars, David says tonight’s display is not the strongest of the year. However, if what you see tonight gets you hooked on stargazing, he says there are two bigger meteor showers coming later this year which Astronomy Ireland Magazine will have plenty of information on.

For anyone who is unable to stick around past midnight, David says they should still be able to see plenty of shooting stars before 12pm, just not as many, so it is still worth heading out for a look.

He also encourages anyone who manages to capture a picture of tonight’s shooting stars to send them to Astronomy Ireland, as they may be included in their Magazine.