TOM Mullally’s Carlow hurlers will have three of their five games in Division 2A this season at home in Netwatch Cullen Park as they bid for an immediate return to the upper echelons of the game. 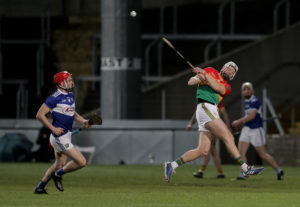 Carlow’s campaign begins with a home game against Wicklow on 9 May. They face a long trip north to play Down in Ballycran on 16 May at 1pm before a home tie against Offaly on 23 May. Carlow play Meath in Navan on 6 June at 2pm before a potentially decisive final game against Kerry in Carlow on 13 June at 1pm.

The team who tops the group after the five games will be declared champions and promoted to Division 1 for the 2022 season.

Carlow’s fixtures in Division 2A of the Allianz Hurling League:

While the hurlers have a busy five game schedule, Carlow’s footballers have just two games in Division 4 South. The positive of that though is that just one win will almost certainly book Carlow’s place in a semi-final where they would be just one win away from promotion to Division 3.

Niall Carew, formerly manager of Sligo and Waterford, managed one of his former counties in his only league game in charge of Carlow so far when beat Sligo last October and the first game of the 2021 season will be against Carew’s other former county. Carlow play Waterford in Fraher Field at 7pm on 15 May. They then host Wexford on 29 May at 5pm.

Carlow’s fixtures in Division 4 South of the Allianz Football League: