BEING named on Conference USA’s All-Freshman Team (2020/21 Season) while in Houston preparing for the Conference Tournament has to be the best way to get such good news. Because of the changes in my role this season, I was surprised to receive this award. I’m usually a goal scorer or a target player. This season, however, I saw my role shift to that of a playmaker, creating opportunities and putting my teammates in positions that I am used to being in. Because the American game is so statistic-heavy, I was concerned that my efforts as an attacking player would be overlooked. But, thankfully, many coaches in my conference recognize the impact I have when I play. 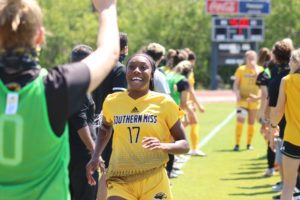 Our quarter-final game against Florida Atlantic University (FAU) was shaping up to be an exciting one. We don’t normally come across FAU during our regular season, so it took both teams some time to figure each other out. However, we got off to a quick start, taking three shots in three minutes and quickly took control of the game. It wasn’t until sophomore Nolubabalo Sishuba challenged the ball in the air after a miscommunication caused the keeper to fumble the ball into her own goal. We were now up 1-0 at the 40-minute mark. After the break, we began the same way we ended, with senior Hailey Pohevitz scoring 30 seconds into the second half. In the 68th minute, FAU scored a beautiful team goal into our own net. They couldn’t do anything else to tie the game. It ended 2-1.

Following a strong team performance against FAU, we were poised to give newfound rivals Rice University a run for their money in the semifinals. They had beaten us 4-0 the previous time around. A loss that required extensive renovation from our entire team to recover from. But we were fearless and prepared for the fight.

The game started off with both teams getting a lot of shots. I was playing almost as a right-wing back. I was constantly on the lookout for my marker in order to keep her from getting the ball and whipping in dangerous crosses. This meant a lot of running in the sweltering Texas heat. Both halves came and went, but no team was able to find the back of the net. That meant it had to go to overtime. Despite an additional 20 minutes of thrilling soccer, neither team was able to score. It was an end-to-end battle, with senior Ariel Diaz having a late chance to put the game away. However, it seemed like this game was destined to go to penalties from the start, and that is exactly what happened. Rice was clinical, scoring all five penalties. On the other hand, our captain, JoAnnie Ramos, was unlucky to have her penalty saved by their very talented keeper. In penalties, the game ended Rice 5, us 3.

Throughout the season, we have defeated the odds while being regarded as the underdogs. We defeated UNT for the first time in program history, defeated the Sunbelt Champions, South Alabama, and took the #25 ranked team (Rice) to penalties on their home field, holding them scoreless for 110 minutes. It is only right that we are now ranked #58 in the country out of a total of 316 teams (the highest in this programs history).

There is no better way to learn as a freshman than to look up to a team with so many seniors who are leaders. They have taught me so much, and it is sad to see the majority of them go. Thank you for an incredible first season, JoAnnie Ramos, Kendall Mindnich, Caitlin Pierce, Macie Pennington, Hailey Pohevitz, Sarah Preston, Jenny Caracheo, Ariel Diaz, Alice Campos, Mackenzie Hamilton, and Keely Hoppmeyer. Although it may seem to be the end, I am confident that it is only the beginning.