AFTER two wins at Kilbeggan yesterday, Patrick Mullins is a firm favourite to win the Irish Amateur Jockey Championship ahead of rival Jamie Codd – but that could all change today. 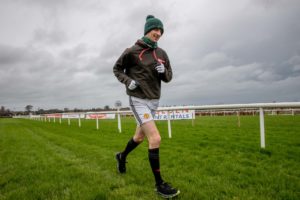 Patrick Mullins is in a race against Jamie Codd for the Amateur Jockeys Championship
Photo: ©INPHO/Morgan Treacy

Patrick enjoyed a bumper double in the last two races of the day on Never Feel Blue and Kottayam to move to 45 wins for the season. Codd currently has 43 but may yet be awarded another win. He was first past the post in the first race  on Mylestown Upper but lost that race in the stewards room. That, however, is under appeal and could yet be recognised as Codd’s 44th win.

Whether that works out for him or not, Codd has the chance to take a grip of the Championship with four good rides at Kilbeggan today while Patrick has none.

It could be that the Championship will be settled at the Punchestown Festival next week and with doubts remaining over the fitness of the Mullins’ stable number one jockey Paul Townend, Patrick could be set for a big week.

The continued doubts over Townend’s fitness since his fall at Fairyhouse on Easter Sunday has allowed Rachael Blackmore to creep closer to him in the race for the Champion Jockey. Blackmore won yesterday on Not Available to cut the defending champion’s lead to seven and she has further opportunities again today at Kilbeggan. It all points to a very exciting finale to the end of the National Hunt season.