ON Monday 5 April Carlow Tennis Club coach, Brian Farrell, posted on the club WhatsApp Social Tennis feed that tennis was set to resume tomorrow, Monday 26 April. The response to his text told its own story. People were missing their tennis.

“Counting down the days.”

This was only a fraction of the replies which were posted in reply to Brian’s initial text.

In recent years the numbers playing tennis in Carlow has rocketed. The club has around 250 underage players and while the adult playing members are not as high, the courts are generally busy during the week and again at the weekend.

Brian Farrell is a full-time coach at the Carlow Tennis Club. Originally from Clontarf, he admits he didn’t play at a high level. He was a decent club player and got into coaching on a part-time basis in the Parks Programme when he was sixteen years of age. 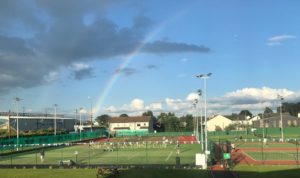 Before going to Australia he worked in Rathgar as an assistant coach and then in Clontarf Tennis Club. Down under, he worked in tennis while he also coached in America for a spell.

He says the most important job he had was in Byron Bay Tennis Center in New South Wales where he worked there for for six to eight months before returning home. That was seven years ago. When the Carlow club advertised for a Director of Tennis he applied and got the job. From a one day a week position he has built it up to a full-time portfolio.

“There are about 200 professional coaches in Ireland and they all work on a professional and paid basis whether the club pay an hourly rate or in my case it is more of an enterprise. I pay for use of the courts and I get as many people to use the courts. It is a professional set-up with a professional outlook. That would be the model of Tennis Ireland,” explains Brian.

He is complimentary of Tennis Ireland who worked with their coaches around the country.

“They have provided decent leadership. Tennis Coach Ireland (TCI), a union for the coaches, have been superb. They have been doing weekly educational Zoom meetings. They have been very progressive,” he says.

Farrell says Carlow is ideally based to take advantage of the increased interest in tennis.

“I would feel we are still very much in the early part of our journey. The junior side is really good. The senior side still needs a lot of work and there is scope there to attract more adults into the club. The ethos is a very welcoming ethos.

“I would have visions for Carlow. There is no reason why Carlow Tennis Club should not be equal to any tennis club in Ireland. We have the land, a large town. My goal would be for Carlow to be the best facility in the country,” Brian say,s while he has plans to hit the ground running as soon as the restrictions are lifted.

“250 kids every week during normal times. We will have sessions and camps over the summer. We are limited in that tournaments will not be allowed for a few months but I am confident of planning a very busy summer,” he predicts.

For youngsters wanting to try out tennis they would be included in an eight week program costing €56 euro. Membership costs €50.

“There might be a perception out there that it is crazily expensive. It isn’t. We would provide all the racquets and balls,” says Brian, who says it doesn’t cost anything to come in and browse around the facilities.

“There is junior coaching going on every afternoon. There are adults playing in the evening. We would encourage people to come up, have a look and don’t be afraid to introduce themselves to me. Feel free to come over if they see me on court. The club is a very welcoming place where everyone is made to feel welcome,” he stresses. 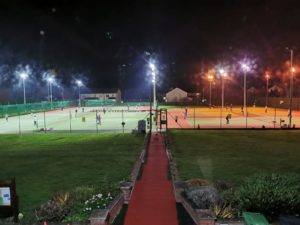 Originally from Palatine, Clíona Connolly is the 2021 Tennis Captain. She dabbled with tennis for a spell at underage level but drifted away from the game until she got married and had her own children. Her son joined in 2018 and now she has taken out family membership (two adults and four children under the age of 18).

In the past tennis was very much a summer sport. Now with floodlights and eight all-weather courts tennis can be played 365 days a year.

“We try to keep it going as much as possible. I would be involved myself with a large group of players who would stay playing throughout the winter as much as we can.

“The last couple of years we have had Christmas morning knockabouts. Just to keep the momentum going over the holidays. We try to run club events for our own members at least once a month and keep it going throughout the year.”

Before Covid, the club Open Week for both adult and junior attracted tennis players from clubs in the neighbouring counties and further afield. There are also interclub spring and summer leagues. Covid played havoc with fixtures last year but they did have a limited Open Week with smaller numbers in August 2020. The Mona McGarry mixed doubles competition is one of the big local events of the year and is now tied in with the President’s Day.

Social Tennis is a particularly good way to get adult members into the club. There is something for everyone.

“We have mornings where the ladies play. The men would have their group as well while the social tennis is mixed. It is easy to integrate into the groups,” notes Cliona.

There are a number of sessions where the courts are rocking to music.

“Cardio Tennis. That is a favourite. Brian runs it in the evenings and hopes to run it more often now,” says Clíona.

The club also has a reception desk which is manned from 7 to 8pm on Monday’s and Wednesday. This allows members to buy tokens for the lights or book courts while it also acts as an information point for current members and prospective new members.

“Sometimes it can be difficult to get in touch with the club to find out information and this has been working very well. We are making a few changes at the moment putting in a Covid friendly outdoor stand to encourage members and non-members to come in. Hopefully everything will go to plan on April 26th and we will be back playing,” says Clíona.

“The message we are trying to get across that tennis is for everyone. The club is open to everyone whether you are junior, senior, men and women. Whatever. It is a sport for everyone.”