THE discipline of Dressage in Ireland is very much a minority equestrian sport. Yet in Carlow Town a young 15-year-old St Leo’s student is making waves in this country. Last year, as an elite athlete, Rachel Carr, with her pony Calelvador May Blossom (pet name Britany), represented her country on the Irish under 16 (Pony) Dressage team in the European Championships which were held from 26-30 August in Hungary. At the level, to get there is an achievement in itself and could well be described as Shamrock Rovers getting into the group stages of the Champions League alongside the likes of Barcelona, Manchester United and Bayern Munich. 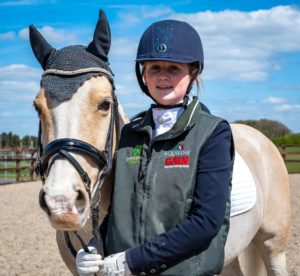 Rachel Carr from Carlow is shown with her pony Calelvador May Blossom
Photo: michaelorourkephotography.ie

On the first day of competition Rachel performed well. The Dressage discipline requires rider and horse to do a test of five moments over five minutes. Rachel was second of the Irish group and came away with a good score of 67.9. Overall the team finished in seventh place which was a phenomenal achievement.

It all started for Rachel when at eight years of age when she joined the local Pony Club. At that stage there is no specialisation. Riders can take part in a range of different activities. Rachel loved having the broad range of disciplines to dabble in.

“They do a bit of everything with your friends. You can do Show-Jumping, Cross-Country and Dressage. When I was nine I did my first one-day event. All your scores are combined.

Eventing is the three disciplines. Cross-country, Show-jumping and Dressage.

“Pony Club caters for all ages. From eight year olds up to under eighteen. It is broken into different age groups. Under 8s, under 10s, under 12s, junior (12-16) to intermediate and senior,” explained Rachel.

Little Orchid (Goldie her pet name) was her first competitive pony before she moved on to form an ultra-successful relationship with Araglen Buck’s Fizz (Fizz) competing in eventing competitions. 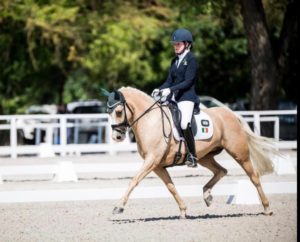 While she competed in a range of events she had already started to take a deep interest in Dressage in 2017. Her parents, Gareth and Rose, could see she was talented and knew she had the potential to make the Irish team. But when at that level you have to be willing to compete at a higher level.

At home Rachel, with her pony Calelvador May Blossom, competed in a range of different events which included third place in The Silver Spurs competition run by Dressage Ireland. She also had a number of wins during the eventing season.

2018 proved to be a hugely successful year for Rachel and with her two ponies, Araglen Bucks Fizz and Calelvador May Blossom she competed both in Ireland and England with success.

Rachel and Calelvador May Blossom also qualified to participate in the Open Dressage competition at the UK Pony Club Championship held in August in Cheshire. They took second place in her arena with a score of 71.25% and were invited back to participate in the “Open Final” where they finished in tenth place. 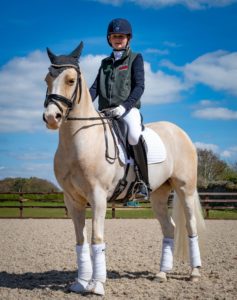 Rachel Carr from Carlow is shown with her pony Calelvador May Blossom who competed in the 2020 European Pony Dressage event in Budapest in Hungary
Photo: michaelorourkephotography.ie

Rachel was the youngest competitor in the under 25 Open Final competition with only 2% separating tenth from second place.

In September, Rachel qualified for both the Eventing Ireland Championships where she finished in fourth place of her category and competed in her first Dressage Ireland National Championships.

As the months rolled on, both Rachel and her parents knew she was close to international selection. To get onto the Irish team you need to gain more experience which is hard to get just in Ireland.

Her father took her and the horses to events in England, Belgium, France, Germany. Yet despite going abroad she didn’t make team in 2019. Rachel took the set-back well.

“That sort of experience teaches you a lot. It is not all about winning. Sometimes even if you do put in a lot of effort you don’t make it. It was enjoyable (travelling) and getting a lot of experience with five judges assessing you instead of one.”

Possibly the disappointment precipitated her decision to specialise in Dressage only? In any case that is what Rachel did. That was in 2019.

Then in 2020 the Covid pandemic struck. She and her father were actually in England in March when the restrictions began to be imposed. There were initial fears the ferry ports might be closed and that they might not be allowed back into Ireland. They did get home alright but they were worried.

The lock-down saw the end of competition but while European eventing competitions were cancelled the Dressage event did take place. Rachel had to do a series of tests on video which were sent to foreign judges to be assessed. There was great joy in the Carr household when it was confirmed Rachel and Calelvador May Blossom were selected to travel. Also selected on that team where Cillian Curran (Blokland Hoeve’s Amor), Martha Jobling Purser (Validos Starlight) and Oscar O’Connor (Top Hero 2).

The International selection was a career highlight for Rachel. She knows she could not have done it on her own. Dressage requires a close relationship between horse and rider with the horse responding to a range of leg, hand and feet movements from the rider. The judge looks for that harmony. The pair get instruction from their coach, Anne Marie Dunphy from Castlecomer. Rachel and Anne Marie know each other for a long time now.

There is no secret to Rachel’s success. She is up every morning at 7am where she puts in a stint with her ponies before going to school. In the evening she is back in the arena in her home place for another session. She loves what she is doing. It is hard work and it isn’t all about sitting on the pony. There is mucking out, feeding, brushing and washing the ponies in all kinds of weather. But that is all part of the sport.

The no school aspect during Covid gave Rachel more time to pursue her equestrian interests.

“It wasn’t as good as I couldn’t travel but it was good that I had loads of time to do things which I would normally have been under pressure to do,” acknowledges Rachel.

There is no guarantee she will make the Irish team this year. She travels to England in May to take part in an event.

Getting to the European Championship in 2020 was special for her.

“Winning the Pony Club Festival Pure Dressage competition two years in a row was a highlight for me,” she says while she admits her Carlow Nationalist Quarterly Sports Award in 2017 meant a lot to her.

It is early days yet but a career with horses is definitely on for Rachel.

With that single mindedness and dedication which she has shown so far at such a young age, there is a lot to look forward to in the years ahead.