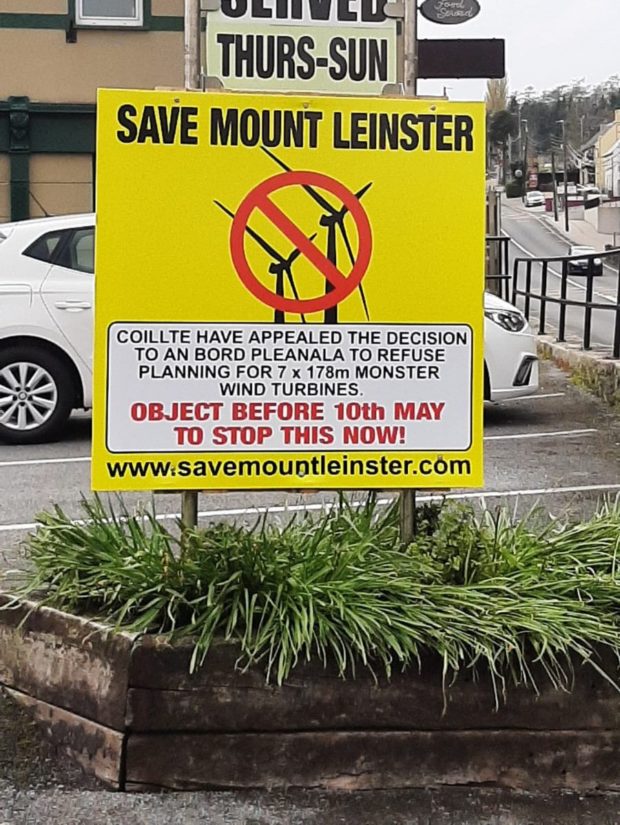 A Save Mount Leinster sign in Bunclody. It is one of many that has been erected near the Carlow Wexford border in recent times

Locals are fighting against a proposal from Coillte to develop seven wind turbines with a maximum blade tip height of 178 metres in the townlands of Rossacura, Cranemore, Kilbranish North, Bealalaw, Raheenleigh and Aclare.

Those present were taken through how to make an observation to An Bord Pleanála, which will be deciding on a planning appeal made by Coillte. The deadline for observations to the planning body is 10 May, but An Bord Pleanála only accepts submissions by post and by hand, so it is advised to have them dispatched by 6 May.

Carlow County Council refused the wind farm application in March on the basis that it would likely threaten protected habitats and have a negative impact on biodiversity and the local landscape. The council added that Coillte did not satisfactorily show that the local road network could handle the volume of heavy-goods traffic expected during construction.

People making observations were advised to write their support for these grounds, but also to relate what personal impact the project would have on them.

“Nationally, going against green energy is a no-no,” said Save Mount Leinster group chairperson Joe Kirwan. “But the big question you have to look at is the impact on bio-diversity and what problems will be caused.”

A wide array of issues have been highlighted, including proposals to have all construction traffic travel up Barker’s Road from Carrigduff for a period that could be more than 12 months. There are significant concerns about the impact of the development on slope stability and the threat to the local water table. The wind farm would also be located across from the Nine Stones viewing point.

In its appeal, Coillte claims the project is needed to contribute to the country’s targets on renewable energy.

Mr Kirwan feared that within a few years, national energy policy could swing to another technology but the long-term damage would already have been done to the area. “We need to be careful not to destroy all the upland wild areas. We have a lot of wind turbines on the Wexford side of the Blackstairs already.”

Mr Kirwan was pleased with the diverse group that took part in the meeting. There were people aged between 15 and 80.

“It’s amazing what Covid-19 has done to bring some people together who may have not gone to a real town hall meeting.”

For more information, check out www.savemountleinster.com.