Walkway would be a major tourism boost for East Carlow 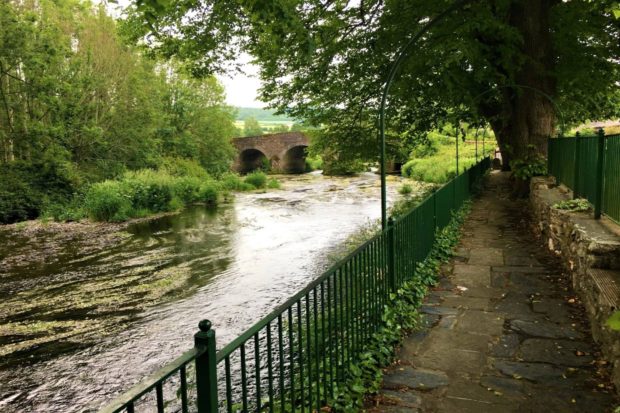 The River Derry in Clonegal

KILDAVIN and Clonegal could soon be reconnected with an off-road cycling and walking route in what would be a major tourism boost for the area.

The project would also see a new pedestrian and cycle bridge over the River Derry.

It’s believed there was a similar bridge on the Derry going back to the 1800s, according to the council’s senior executive officer Brian O’Donovan. The route would be around two-and-a-half-kilometres in length and it would provide great views of the River Derry if the project comes to fruition.

Importantly, it would link two famous walks – the South Leinster Way, which begins at Kildavin, and the Wicklow Way, which ends in Clonegal. The exact route will have to be determined through meetings with local landowners.

At a recent meeting of Tullow Municipal District, Mr O’Donovan said funding had been approved for the project. The project is at tender stage for a bridge design.

There had been some question marks over whether to put a bridge on the River Slaney or the Derry.

Mr O’Donovan said that initially there had been a preference for a crossing over the River Slaney, as it has a direct route into Kildavin.

“After visiting the site, we realised it was going to cause a lot of problems on parts of the Slaney. The elevation of the bridge was pretty much going to be over someone’s back garden,” said Mr O’Donovan.

There are also issues of flooding risk associated with the Slaney.

The River Derry became the preferred crossing and Mr O’Donovan said there had been an old bridge in the area, after viewing old ordnance survey maps.

“We will be required to go to An Bord Pleanála (for planning),” added Mr O’Donovan, who promised to keep councillors updated.

A separate virtual meeting, which took place recently, further discussed the project and funding. Presentations were made by Fáilte Ireland, Carlow Tourism, Carlow County Development Partnership and a representative from Kilmacthomas on the Waterford Greenway, who talked about the benefits it has had locally.

Independent councillor Charlie Murphy lauded cllr John Murphy for his work in campaigning for the project over many years.