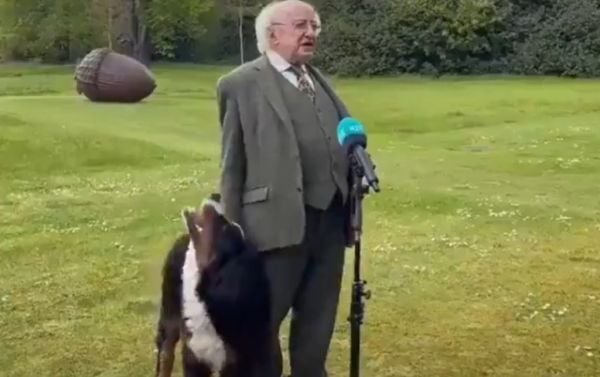 President Michael D Higgins’ dogs often steal the attention during official events, and it happened once again during a TV interview on Sunday.

President Higgins has two Bernese Mountain Dogs, Bród and Misneach, and he is often seen walking them around the Phoenix Park.

During an interview with RTÉ over the weekend, puppy Misneach was doing absolutely everything he could to get his owner’s attention.

Mr Higgins gave the puppy a pat on the head but made sure to remain professional as he finished the interview.

The video of Misneach quickly went viral and it has since been uploaded to the President’s TikTok account.

🐶 @PresidentIRL Michael D Higgins’ puppy was competing for his owner’s attention with friendly nudges and nibbles as the President spoke to @rtenews on Sunday. #misneach pic.twitter.com/MpZRwBL0QP