WHEN Carlow take on Wicklow on Sunday in the first round of the Division 2A senior hurling league Eoin Larkin will be part of the opposition back room team. His presence means he will be trying to plot the downfall of a number of the Carlow team whom he will be managing at club level later in the month.

When Ballinkillen appointed the Kilkenny and James Stephens club man, who has won eight senior All-Ireland medals, they were giving Larkin one of his first taste of senior club management. The Kilkenny legend is obviously looking at going down the coaching and management route. It is small steps at a time for him and now the Wicklow manager, Eamonn Scallan by asking him to join the management team, feels Larkin is the sort of person who could progress hurling in the Garden County. 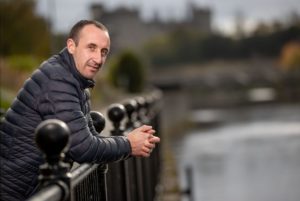 Larkin says he will be able to marry the two positions and doesn’t feel it will be a problem when he will surely see at close hand a number of the Ballinkillen players in a Carlow jersey on Sunday.

“It is a different kind of scenario. When I joined Ballinkillen, I didn’t think I would be in a situation where I would be on the side line watching players who I would be managing later on in the summer,” he explained.

According to him business is business. He will do what he can to help Wicklow on Sunday. Next weekend also coincides with the lifting of restrictions which will allow adult GAA club players to train together on 10 May. By then Larkin will have taken further steps in getting a full Ballinkillen panel out on the training field so that he can assess what he has to work with at club level. The Carlow v Wicklow game will not be on his mind then.

Ballinkillen’s signing of Larkin could be considered a bit of a coup. It all seems so long ago now since Larkin was announced as their new manager. That was back in November. No-one could have foreseen what direction the pandemic was going to take in the months ahead but immediately after Christmas as the Covid numbers soared sport at local and intercounty level was halted.

Larkin says a way of life was put to one side as people socially distanced and all gatherings were banned.

“So many people are involved in GAA clubs somewhere along the line. You take it for granted and when it is taken away you can’t wait to get it back,” Larkin says.

No matter what the sport, it is now a joy to watch young players training.

“Lads would say they would do anything to get it back. They miss not being around their friends and team mates. When it is taken away you realise the importance of it. For older people it is important for them. It is a social occasion for them as well. Hopefully, we are on the right side of it now. Obviously, we have to be careful going back,” maintains the new Ballinkillen manager.

There is no fitness and hurling regime set in stone in Ballinkillen yet. Training will commence next week. What day, what time is not certain.

“It is about a week away at this stage. We will meet now and see when we will get back. Nothing is in place at the moment. It is something to work on.”

Larkin says he didn’t feel it necessary to meet players and instead they were trusted to keep themselves in trim even though they had no idea when they would be able to come together on the field.

“We didn’t do a whole lot of talking but we did try and keep as active as possible. We gave out programmes to the players. They have stuck to the plan and now we have a date for when we can get back.”