A potentially serious injury to midfielder Ciaran Whelan, before the game even started, marred what was an otherwise perfect first game under new manager Tom Mullally for the Carlow hurlers today in Netwatch Cullen Park.

Whelan suffered an ankle injury during the warm up and his place in the team was taken by James Doyle. Whelan was treated at the ground before an ambulance eventually arrived and he left for hospital early in the second half. 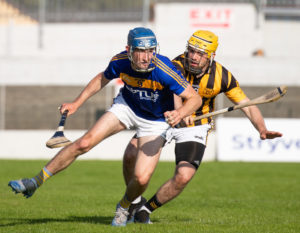 Once the game began, Carlow brushed off the challenge of Wicklow in the opening round of Allianz Hurling League Division 2A and eventually won 3-19 to 0-17.

Frees dominated the opening half. Carlow went into the break leading 0-13 to 0-8 with Marty Kavanagh scoring 0-7, six frees, while Christy Moorehouse scored all of Wicklow’s first half tally from frees.

Kavanagh went on to add two second half goals, in the 39th and 55th minutes, and finished the game with a tally of 2-9. Ross Smithers, who played in midfield following Whelan’s late withdrawal, scored the third Carlow goal in the 65th minute but that was the home team’s only score in the last 12 minutes, and seven of the last eight scores of the game were Wicklow points.

Next up for Carlow is a long trip north to play Down in Ballycran next Sunday at 1pm.

For a full report, reaction, analysis and photographs of Carlow’s first game of the season see Tuesday’s paper.