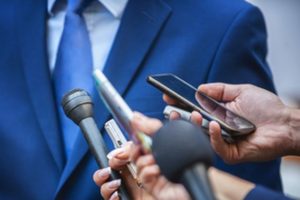 Do you want to learn the practical skills that will open up a career in traditional and new media? If so, a new higher diploma course from IT Carlow and Carlow College could be just what you’re looking for.

The two colleges, in association with Carlow Kilkenny Skillnet, have just launched the Higher Diploma in Arts in Journalism and New Media. This one-year Level 8 course aims to equip you with the writing, research and analytical skills that you’ll need to make a career in the fields of journalism, media and communications. It is the only third level journalism course in the southeast.

Covering such subjects as news gathering and reporting, feature writing, digital journalism and storytelling, media law, values and ethics, broadcasting and media entrepreneurship, the course will involve for two evening classes a week during the academic year, as well as seven Saturdays. Teaching will be a hybrid of face to face and online classes. The higher diploma runs from this September until May 2022 and with Skillnet funding will cost €1,000 per person (the unsubsidised price would be €2,500).

To be accepted on this pilot course, you must have an NFQ Level 7/8 major award in an unrelated area and numbers will be strictly limited to 18 students. A pre-interview is required before students will be accepted.

Commenting on the introduction of the higher diploma, Dr Joseph Collins, head of the Faculty of Lifelong Learning at IT Carlow, said: “We live in an era of fake news and misinformation. Anyone with access to a PC, tablet or smart phone can share what’s on their mind by blogging regularly or tweeting continuously. I believe that a course such as this, with its emphasis on practical skills, knowledge and ethics, has never been more important or more timely.”

Helen Maher. Vice-President of Carlow College, added: “Both Carlow College and IT Carlow have a long history of providing courses in media studies and journalism. Given our physical infrastructure and academic resources, Carlow is ideally placed to become the centre of journalistic excellence in the greater Leinster area.”

Ashling Ward, Network Manager with Carlow Kilkenny Skillnet, commented: “In the ever-changing world of media, continuous training is not an option but a necessity, but it must still be founded on the bedrock of a traditional reporter’s skills. Carlow Kilkenny Skillnet is delighted to help make such a valuable course available to aspiring journalists.”

Applications for the Higher Diploma in Arts in Journalism and New Media are open from Tuesday 4 May to 4pm on Tuesday 1 June 2021. Interviews will take place by phone or Zoom on 8 June and places will be offered on 13 July. To apply, email [email protected].