CARLOW’S Tom Daly’s first occasion to lead Connacht out as captain will live long in the memory after his side scored a famous 24-20 win over Munster in Thomand Park in the Guinness Pro14 Rainbow Cup. 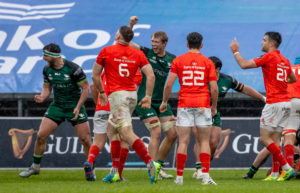 A James Cronin try helped Munster into an early lead but Sammy Arnold replied almost instantly and then Daly was involved in the build up as Conor Fitzgerald went over for Connacht’s second try in the 27th minute to make it 17-7.

Rhys Marshall scored the home team’s second try of the game shortly before the half time break but a Kieran Marmion try just 45 seconds into the second half eventually proved decisive. Fitzgerald kicked the conversion to make it 24-17 and although Connacht didn’t score again they held on for just their second away win over Munster since 1986.

“It wasn’t easy out there, I had lads shouting at me left, right and centre to go and make captains challenges and stuff like that,” said Daly when speaking to EirSport after the game.

“We knew it was going to be really tough coming down here. We’ve been down here a few times in the last couple of years and it’s always a dogfight and a close result,” added Daly, who was making his 47th appearance for Connacht.

Connacht slumped to a 50-21 defeat to Leinster last week after a storming start so Daly was pleased to respond, ahead of an away game against Benetton and a home tie against Ospreys in the coming weeks.

“After a tough a week last week it’s nice to come out and put in a performance we can be really proud of and lead into the next few games in the Rainbow cup,” Daly told EirSport.

"Leinster put us to sword in the maul last week, so we really worked on that."