CARLOW’S Tom Daly will lead out Connacht for the first time after he was named as captain for Friday’s Guinness PRO14 Rainbow Cup interpro with Munster (6pm).

Daly has enjoyed a breakthrough season for the province, missing just one game and consistently stringing together some impressive performance from inside centre. 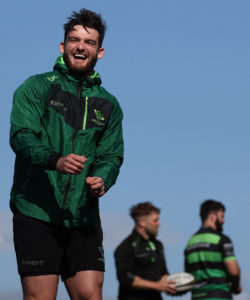 Tom Daly will captain Connacht for the first time this evening against Munster
Photo: ©INPHO/James Crombie

He continues his partnership with centre Sean O’Brien, with former Munster men Alex Wootton and Sammy Arnold named on the wings. John Porch continues at full-back as does Conor Fitzgerald at #10, while Kieran Marmion is drafted into the scrum-half shirt.

There are six changes in the pack including a new look front-row of Paddy McAllister, Shane Delahunt and Dominic Robertson-McCoy. Ultan Dillane returns to partner Niall Murray in the second row, and there are also starts in the back row for Cian Prendergast and Abraham Papali’i alongside the retained Conor Oliver.

“Tom Daly’s performances this season have been a real plus for us. He consistently brings a huge level of intensity in both attack and defence, and a consistent run of games has allowed him to go from strength to strength. I know he’ll make an excellent captain and lead by example again.

“We’ve shaken things up a bit in our starting XV with players who deserve a start either through training performances or impacts off the bench. There’s bags of experience among the replacements as well with six centurions so I’m sure they’ll do a job when called upon.”