NIALL Carew has named his team for the first game of the Allianz Football League season.

Carlow take on Waterford in Fraher Field, Dungarvan on Saturday at 7pm and Carew has named 11 of the players who started last year’s Championship game against Offaly, plus Jamie Clarke who came on as substitute that day.

Bagenalstown’s Ciaran Cunningham becomes the third goalkeeper to start for Carew in just his third game in charge. Conor Lawlor and Liam Roberts come into the corner back positions.

Wexford are the other team in Division 4 South and if Carlow harbour any hopes of promotion then a result against one of Carew’s former teams is crucial. 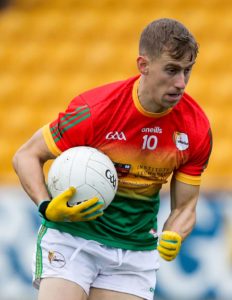